Part I: Local sports before COVID-19 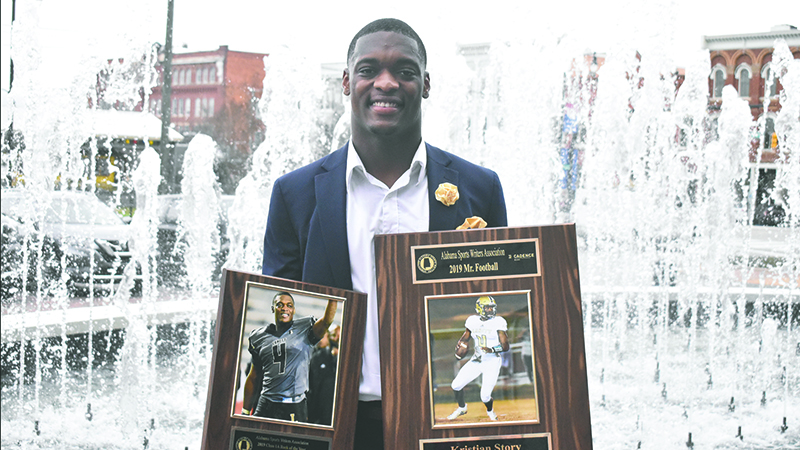 Lanett’s Kristian Story was named the Mr. Football winner in January. He is currently playing football for the University of Alabama. --File photo

This is the first part of a series detailing the sports year in review in Chambers County.

Richard Carter celebrated his 700th win in an area win against Loachapoka. Carter had been on the sideline for nearly 50 years before retiring at the end of the 2019-20 basketball season.

The Lanett quarterback had already finished his high school football career with a state championship and had committed to Alabama. He made history as the first player from 1A and the first player from Chambers County to win the Alabama Sports Writers Association Mr. Football award, which is given to the best football player in the state.

After finishing winless a year ago, Springwood boys basketball had their first marquee win in the Lisa Sampson era, as it defeated ranked Chambers Academy 48-46 in a tight game that went down to the wire.

For the first time in nearly a decade, the LaFayette boys basketball team swept Lanett. The Bulldogs held off a late run to blow out the Panthers on the road. Senior Tae Burton finished with 30 points in the win.

With less than four seconds remaining, Lanett’s Alyse Madden grabbed an offensive rebound and flipped up a shot that fell when the final horn sounded. The Panthers avoided the sweep with the win.

Beulah won the regular-season area title with a dominant win against Dadeville. The Bobcats built a double-digit lead in the first half and controlled the game in the second half with tight defense.

The Valley boys basketball team upset Lanett in an emotional senior night that had a couple of fans escorted out by the police and a last-second shot. Valley controlled the game in overtime and didn’t allow the Panthers to get looks at the 3-point line in overtime.

LaFayette star safety Jordan Walker signed his official letter of intent to play football at the University of Tennessee in Chattanooga. Walker will be playing for UTC when they start playing in the spring.

Chambers Academy center Gabe Brooks signed his letter of intent with Faulkner University. He became the first of three members of the Rebels senior class to sign with the university.

After leading Auburn with 763 rushing yards and 10 touchdowns his redshirt sophomore season, LaFayette native JaTarvious Whitlow entered the transfer portal. He later announced that he would attend Western Illinois.

LaFayette boys basketball dominated Ranburne to win the area championship. The Bulldogs scored more points in the opening quarter (22) than they allowed the entire game (20).

The Chambers Academy boys lost 50-40 to Evangel in the state championship game for the second consecutive year. The Rebels struggled in the fourth quarter to score, which ultimately led to their downfall.

The Chambers Academy girls lost to Southern in the state championship game. The Rebels struggled to score in the first quarter, building a large deficit they could never overcome.

The Valley girls basketball team lost in its first game in Montgomery, losing to Sylacauga 41-34. The Rams struggled early in the game to score.

The first-quarter deficit that Sylacauga built held up the entire game.

Barber finished averaging 11.1 points a game and 4.8 assists a game. Daniel averaged a double-double for the Rebels, finishing with 10.5 points and 10 rebounds a game.

Rebels named to AISA All-

Four players from Chambers Academy were named to the AISA All-Tournament team.

The LaFayette boys basketball team lost in the state semifinal game to Barbour County. It was the team’s first loss of the season. The Bulldogs allowed a late shot in the game that cost them the win.

Lanett falls to Pickens 57-55 in 1A State title game

The Lanett Panthers lost to Pickens County in the 1A State Championship game. The Panthers had a chance to win the game at the end but could not make the final shot. It was also Richard Carter’s final game as a head coach, stepping away from more than 50 years of basketball.

Spring sports go on hold because of coronavirus

The first COVID-19 case in the state of Alabama was confirmed on March 13. Because of the first positive test, the AHSAA initially shut down spring sports for two and a half weeks.