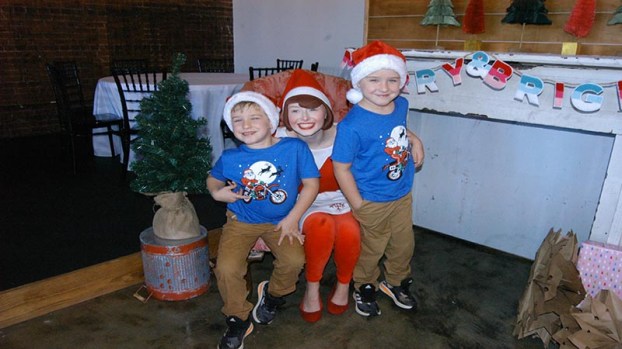 “This was our first year to do this,” said co-owner Keisha Coniglio. “I love the way it went, and the parents told me they did, too. The whole point of it was to be more special than a normal breakfast. We want to bring people to our quaint little downtown district. We are looking forward to hosting a 1980s-style prom event in the spring. It will benefit mental illness.”

Coniglio said she wanted to thank American Smoke House (ASH) for catering the event. She also thanked Twigs and Berries for having the gifts on a large gift table); Mama Jama, a local character who encourages children to read; and Peppy for being there as an elf.

“We want to thank them for partnering with us,” she said.

How does one go about making reindeer food? It’s not recommended for people but reindeer apparently love the mixture of oats, sugar along with some sprinkles and confetti.

Located in the former Chattabrewchee building on West 4th Avenue, Burrow Warehouse had its official grand opening on Oct. 27. Owners Michael and Keisha Coniglio relocated to West Point from LaGrange seven years ago. “We were looking for a place to land a business, and we thought what better place than our hometown?” Michael said at the grand opening. “To find this building and bring it back to life has been enjoyable.”

The couple had a process to come up with the name Burrow Warehouse. As Keisha explains, “Coniglio” is the Italian name for “burrow.” The building’s exposed brick looks like what one would see in a warehouse.

The building may look like a warehouse, but it’s used for having fun and memorable experiences. Burrow Warehouse may be rented for events such as micro weddings with up to 25 guests. In normal times, the capacity is for 300 people, which includes 200 people inside the 10,000-square-foot building and another 100 outside in a large cocktail section. Tables can seat up to 175 guests.

The Burrow Warehouse is not only a venue but also a prop house offering a wide variety of boutique event rentals.