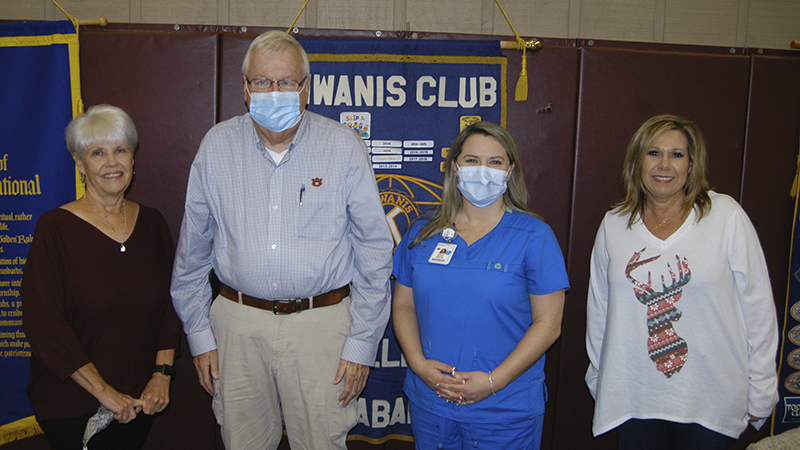 VALLEY — With calendar year 2020 only three weeks from its conclusion, Valley Mayor Leonard Riley had a good opportunity to review this past year during the noon hour on Wednesday. He was the guest speaker at the weekly meeting of the Kiwanis Club of Valley.

After being re-elected without opposition in August, Riley is in his third term as the city’s mayor. He said he’s enjoying serving the city as much as he did in his first term.

During his term as mayor, Riley said the city has recovered from some financial issues, and a one-cent sales tax approved by the previous council in 2012 has helped a lot. During his first campaign, Riley pledged for that one cent increase to go to much-needed infrastructure improvements in the city, which includes street paving and working with East Alabama on water and sewer improvements.

“We have had lots of paving going on the past few years,” he said. “We spent $850,000 this year in paving Valley Industrial Boulevard (which runs behind the former Lanier and Carter mills). It costs so much because we had to rebuild the road from the base up.”

Also resurfaced this year were 31st and 33rd streets in Shawmut, 48th Street (which leads to EAMC-Lanier Hospital), the portion of Hopewell Road that’s in the city limits, 65th Street, Columbus Road, Cleveland Road and Boulevard in Shawmut.

Chris Clark Grading & Paving has the 2021 contract, which gets under way on Feb. 1. Collectively, the projects will cost around $775,000. Streets to be resurfaced include Williams Street, 14th Place East, Whitesmill Road, 61st Street, 31st Avenue, 26th Avenue, 24th Avenue and an unnamed street in Fairfax.

Bids will be advertised in mid-January to resurface seven more streets. They include Towel Avenue (which runs past the John Soules Foods site), River Oaks, Riverwood Drive, King Road, 60th Street, Morgan Street and half of MLK Drive.

Riley is especially pleased that a lot of work needed at the city’s industrial park was taken care of in 2020. A $735,000 pump house will allow for an increase in water pressure and volume in the park. A new, 10-inch water line circles the park and a new 750,000-gallon water tank has gone up near the industrial park site off Fairfax Bypass.

“We have plenty of water to serve any industry we could have coming in,” Riley said. “We have prospects contacting us almost every day, but we are not giving away any real estate. We want companies that will pay their workers $17-18 an hour.”

One of the more unusual projects that has been going on this year is the new lift station that’s being installed off Towel Avenue. It will be needed by John Soules Foods, which will be releasing an estimated 400,000 gallons of wastewater during the late-night hours. To install the lift station, a hole had to be dug more than 40 feet in the ground. Many truckloads of dirt are being hauled in to fill in the site. A gravity line and a force main have also been installed on Towel Avenue. An abandoned sewer line that runs underneath the CV Railroad Trail will also be put back into service.

The mayor said he is impressed with the way John Soules Foods gets things done. The area around the 266,000-square-foot main building has become a very busy work zone. The Tyler, Texas-based company is employing local subcontractors such as Batson-Cook, Brumfield Electric, Harmon Engineering and Hydro Services to get the plant ready to open.

The company could be ready to start its first production line next July. This will mean over 200 new jobs in Chambers County. When the second and third production lines are added in the coming years, employment is expected to rise past 500.

“There’s someone from John Soules Foods flying in every week by private plane,” he said. “They are now landing at the airport in Auburn and driving here. When Lanett opens their expanded airport, they can land only a few miles away from their plant. They really like that.”

The Chambers County Development Authority (CCDA) has already relocated its offices to the new airport terminal. The airport should be open by this time next year. When planes can land there again, they will be touching down on a 5,400-foot runway, one that’s longer than the one in Auburn and one of the longest in east Alabama.

Riley is really upbeat about a new subdivision that will be developed in the coming years off Combs Road on the city’s west side. It’s being developed by Holland Homes LLC of Auburn and will be the first “smart home” subdivision in small town Alabama.