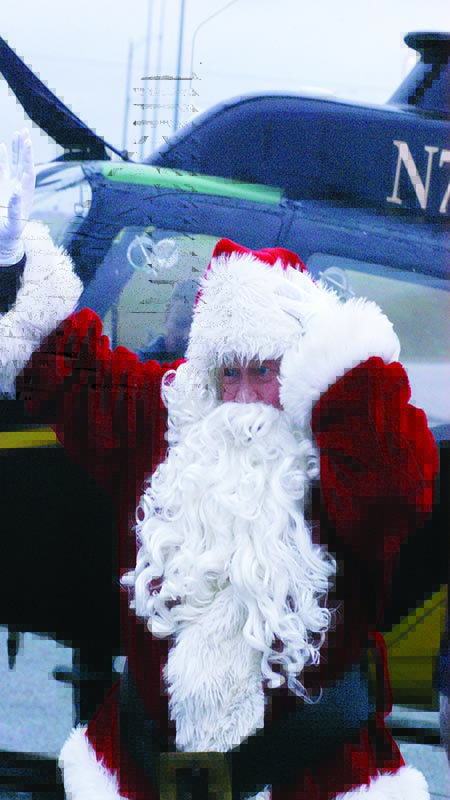 VALLEY — Santa Claus is famous for riding across the sky in a sleigh pulled by flying reindeer.

On Friday, he was being flown across Chambers County skies in a helicopter piloted by Chief Deputy Richard Carter of the Chambers County Sheriff’s Office. They landed outside King Ford, and Santa walked to the showroom, where some excited children were waiting to see him.

Along the way, he stopped to wag his finger at some “bad boys” who were locked up in the showroom pokey. Sheriff Sid Lockhart, Deputy Scott Thomaston, Probate Judge Paul Story and Chief Deputy Carter (yes, even the guy who flew him in) were in a mock slammer as part of a jail bail event. Santa gave them a stern look and told them this was not the time of year for anyone to be naughty.

The fun event was part of a fundraiser for ACA Gives, Inc., a 501(c)3 nonprofit that seeks to help children from dysfunctional families.

ACA Gives was founded last year by bail bondsman Barry Johnson of Roanoke, who had seen first-hand how crime seemed to find those who were less fortunate.

He resolved to make a difference not only in Randolph County but in surrounding areas as well.

The concept of focusing on children appealed to him because kids are the only hope this world has of initiating change for the future.

ACA Gives was successful in its first year of outreach in Roanoke and the surrounding area, so much so that it expanded into neighboring Chambers County this Christmas season.

According to the Alabama Department of Public Health, Chambers County has a poverty level of 23.7 percent with close to 40 percent of that number being children under 18 years of age.

Elizabeth Thompson, director of special initiatives for ACA Gives, told The Valley Times-News that her organization isn’t trying to take the place of such organizations as The Chambers County Department of Human Resources or the Christian Service Center.

“We want to be another source of help,” she said. “There is an application process people can go through at the sheriff’s office.

Deputies know people who need help, and we are an organization that can do that. We will deliver gifts by Christmas Day.”

In December, ACA Gives partners with local businesses and law enforcement to collect new, unwrapped toys to distribute to the community during the Christmas season. Families are encouraged to apply with the application giving the number of people in a household and proof of income.

After reviewing an application, ACA Gives cross-references the information in the area to make sure its efforts will help meet the goal of helping as many families as possible without crossover.

ACA Gives, Inc. promotes the development of young people in achieving their full physical, intellectual and social potential, as individuals, as responsible citizens and as contributing members of their local community.

“If you or anyone you know would like to help us by donating new, unwrapped gifts,” said Thompson, “please take them to King Ford, your local law enforcement office or call Mr. Barry Johnson at A Call Away Bail Bonding at (256) 282-0995, and we can arrange for pickup if needed.”

ACA Gives, said Thompson, sees itself as a vehicle that gets donations to children.