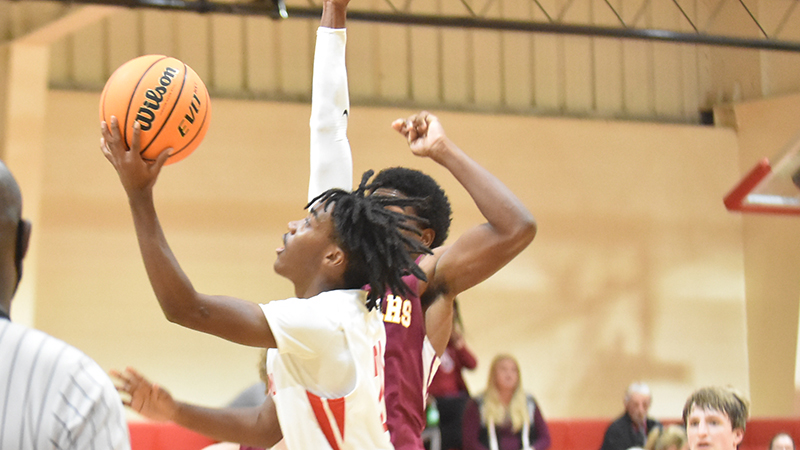 “We’ve been talking about defense all year long, and that’s what our focus is to start defensively being aggressive and setting the tone,” head coach Lisa Sampson said. “They did that against a very athletic and very good team tonight. We had lapses in our judgment, but we’re going to get there. We tried to rotate as many as we could tonight too, so that kind of hurts in consistency of play. Everyone did what we asked them to do for the most part.”

Springwood’s biggest offensive weapon this season has been its defense — putting pressure on the ball handler, tipping passes and jumping in the passing lanes — has generated quick and easy baskets.

That was the case midway through the first quarter of play. The game was tied at five apiece at the five-minute mark of the opening quarter, then Springwood’s defense started to create its normal havoc.

In about two minutes, Springwood jumped out to an eight-point lead that continued to grow the last three minutes of the quarter. Springwood held Escambia to just two points in the final five minutes of the first quarter, leading to a 14-point advantage heading to the second quarter.

Senior Calvin Crabb was the biggest benefactor from the quick scoring, finishing with eight points in the quarter.

Both teams traded baskets to start the second quarter, as Springwood added just one point to its lead about halfway through the eight-minute quarter. But from the halfway point in the quarter, the Wildcats struggled to find a rhythm, scoring just three points the remaining four minutes of the half.

Overall in the quarter, Springwood hit just three shots, two of which were threes.

The Wildcats nearly doubled the Cougars’ production in the third quarter, outscoring them 15-8. Crabb once again led the way scoring in the quarter, scoring seven of the team’s 15 points. He was able to get a couple of fast-break opportunities, which has been hard to find this season and knocked down his one 3-point attempt in the quarter.

Just as they did to end the first half, the Wildcats struggled to close out the fourth quarter. The 15-point lead slowly started to dwindle, as the Wildcats’ rotation started to change and passes started to go awry because of the Cougar press.

“Mentally they just relaxed,” Sampson said. “They thought they had the game won, and they just were not executing what we were asking them to execute. We’ve got to get better to be a better team.”

Crabb finished with his best shooting game of the young season, finishing with 17 points, including a pair of 3-point shots.

“You know Calvin has it in him,” Sampson said. “I think sometimes he is pacing himself because he’s not getting too many breaks. His shot is there and he works harder than anyone else on the team at his shot, so I wasn’t worried about him as far as those starting to fall. Shooters just have short memories, and they just keep shooting, and he did. He had a great game.”

DQ Cameron finished with 14 points, while Tyrese Ferguson and Eli Westbrook each finished with 10 points. Chevyn Goode was the lone bench player to score, finishing with three points.

Springwood goes on the road for its next game, traveling to Southern Prep for its first area game of the season. Tip is scheduled for 5 p.m. on Tuesday.