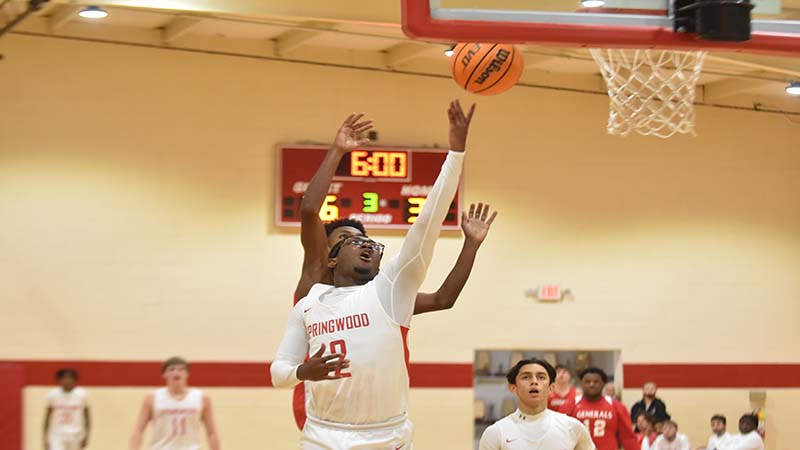 During the first three minutes of Saturday’s game, the Springwood boys basketball team was trailing by six against Abbeville Christian. Abbeville was able to get the ball up the court and score quickly, something most teams have not had a chance to do against a tough Wildcat defense.

Midway through the quarter, Springwood turned up the defensive pressure and pulled away for a 74-40 win.

“It’s our defense that gives us the spark,” head coach Lisa Sampson said. “When we played the other night [Thursday against Glenwood], we weren’t in the right spots defensively. Today, we made some adjustments, and they were where we were supposed to be. That’s what got us going.”

After trailing the entire first quarter, Springwood shifted into its usual full-court press that excels at causing turnovers. The Generals, who scored 14 points in the opening quarter, were held to seven points because of the pressure their ball-handlers faced coming out of the inbounds. Solid defense turned into quick offense, as Springwood quickly cut its four-point deficit into a lead less than two minutes into the second quarter.

While its defense was causing problems, its offense got hot by in-close shooting, Springwood contributed a bulk of its 23-point second quarter from beyond the arc and at the free-throw line.

Springwood led by 12 at the halftime break and quickly extended the lead in the first couple of minutes of the half.

“We always say the first five minutes of the second half is most important,” Sampson said. “That’s where we want the most energy and to just put it away, and they did. They’re just buying into what we’re teaching. It was fun to watch today.”

Less than three minutes into the second half, Springwood led by 20, and most of the points were scored near and around the rim. It outscored Abbeville 24-7 in the quarter. Springwood senior DQ Cameron finished with 10 points in the quarter.

Springwood emptied its bench in the fourth quarter, which has happened a lot to open the year. Every player on the roster had at least a couple of minutes of playing time in the game.

Sophomore Eli Westbrook led all scorers with 15 points. Seniors Cameron and Calvin Crabb and junior Jayden Lenz all finished in double figures, finishing with 14,13 and 10 respectively.