Springwood girls hold on against Lakeside 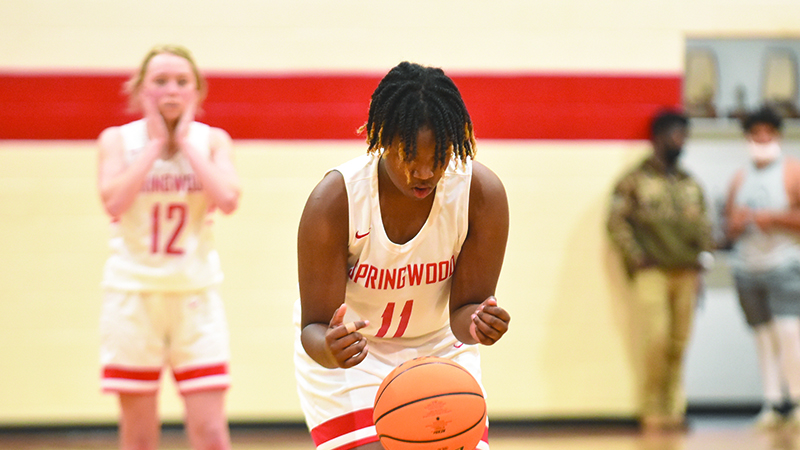 The Springwood girls basketball team entered the fourth quarter of its game against Lakeside with a 13-point lead. As the quarter progressed, the lead started to dwindle, reaching just two with less than 30 seconds to play in the game, but the Wildcats did just enough at the free-throw line to hold onto the win, picking up its second win of the season 48-43.

“They showed a little bit of a zone pressure that we really haven’t seen or worked on,” head coach Lisa Sampson said. “That was key for us. Just having an understanding of time and score. What do we need to do when we’re up seven with two minutes left to go. It’s all a learning process. I’m just proud of their toughness.”

During the first four minutes of the game, Springwood was in complete control. It was up 8-2 and was looking to quickly add to its lead midway through the opening quarter. After a couple of substitutions, Lakeside was quickly back into the game, scoring six unanswered points in less than two minutes to tie the game at eight. Springwood was up four at the end of the first eight minutes of play, as eighth-grader Emily Jo Matthews hit her second 3-point shot of the quarter.

In the second, the Wildcats quickly turned up the tempo, as they were able to force turnovers. Led by eighth-grader Tori Patillo, the Wildcats jumped out to a 10 point lead in four minutes of play.

However, just as they did in the first quarter, the Chiefs crept back into the game late in the quarter. They stopped turning the ball over and made several trips to the free-throw line to cut into the Springwood lead. At halftime, the Wildcats led by six.

At the end of the first half, the Wildcats were struggling to score, scoring just six points in the final four minutes of play. That cold stretch continued into the third quarter, as Springwood was held scoreless for the first four and a half minutes of the second half. The only damage Springwood was able to do was from beyond the arc, as Matthews hit another pair of 3-point shots. While their offense was struggling to score, Springwood held Lakeside to just five points in the quarter.

Like it had done all game, the Chiefs were able to go on a run to start the final quarter of play. Springwood’s lead went from 13 to seven three minutes into the fourth quarter. During the next four minutes, Springwood’s lead continued to shrink, going to four with less than a minute to play, but Springwood, led by Patillo, was able to hit enough free throw shots in the final minute to sneak out its win.

“Tori was huge for us,” Sampson said. “She’s a seventh-grader but she’s a leader for us. You just don’t see that a whole lot. She was just cleared to play today. She didn’t practice yesterday. For her to show me what she did, it’s just a testament to her.”

Tuesday was Springwood’s first game since the season opener, as the team was forced into quarantine after that first game against Lafayette Christian.

“It was great, and we’re missing a post player too, so it was huge for them,” Sampson said. “When you look at Lakeside, they’re a much bigger team and I thought the team rebounding and aggressiveness was just great from top to bottom.”

The post player Sampson mentioned was Courtney Eslick, who is going to be one of the Wildcats’ starters and is one of the senior leaders on the team.

“Courtney gives us that tenacity underneath and understanding of what we’re trying to do,” Sampson said. “We stuck Emily [Drake] down there and Merredith [Woodham], and they did a great job filling in. Two undersized, but seniors that are great role models for our younger team.”

Matthews led the team with 18 points, followed alongside by Patillo, who finished with 15 points.

“I was super excited about both of them,” Sampson said. “Tori has fought some injuries and both of those kids played JV and played a lot of minutes in JV. For them to have the energy and the umph to finish on varsity and play big minutes, just shows me the type of kids they are. EJ [Matthews] shot the ball really well.”

The girl’s team is scheduled to be off for a little more than a week. It will return to play on Dec. 17 when it hosts Glenwood for its first area game of the season.