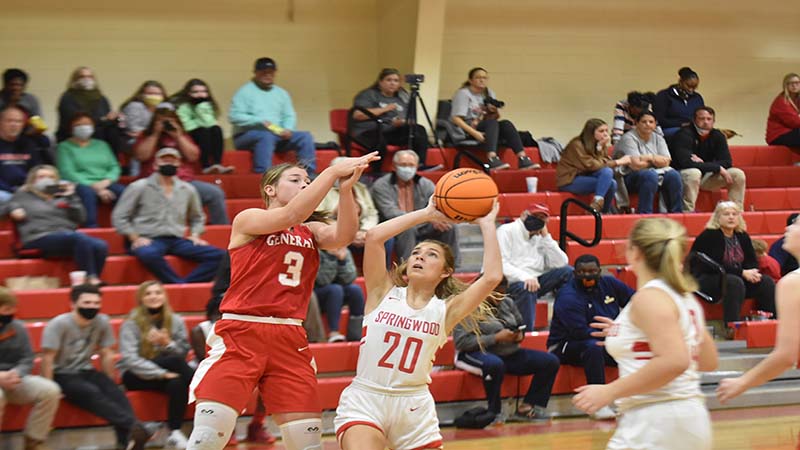 The Springwood girls basketball team stumbled out of the gate against Abbeville Christian, struggling to score for almost the entire first quarter. Its struggle along with dealing with foul trouble handed the Wildcats a 58-20 loss on Saturday.

“We tried to mix it up defensively and offensively, but we could never find someone to get us going,” head coach Lisa Sampson said. “With the loss of Tori [Patillo] being injured, this is a young team, and they’re not having anyone step up and that hurt us.”

Patillo was the team’s leading scorer a year ago and has been dealing with a hip injury since starting the year in November. Sampson said Patillo should miss the rest of the Wildcats’ games until January.

The biggest difference in the game was the amount of free-throw opportunities. Abbeville Christian finished with 23 free-throw attempts, hitting 14. Springwood had just two free throws the entire game.

“That’s a testament to their good defense,” Sampson said. “You have to play good defense without fouling, and we haven’t quite figured that out yet. We’re trying to teach them to be aggressive and that doesn’t need to translate to fouling. We’ll get there.”

To start the game, Springwood was holding its own with Abbeville. Neither team was having much offensive success. Springwood was forcing bad shots but couldn’t stop turning the ball over on offense. The turnovers started to lead to quick scores for Abbeville or fouls by Springwood.

With three minutes left in the first quarter, Springwood had closed to the deficit to eight. Around the same time, two starters, Emily Jo Matthews, who has led the team in scoring, and Madison Reeves, who has been the Wildcats’ best defensive player, were sidelined to the bench because of early foul trouble.

“[Reeves is] the spark plug. She’s going to play hard for us, so that definitely hurt,” Sampson said. “EJ getting in foul trouble too hurt us. That’s an eighth-grader that’s just learning the game.”

The loss of the two starters allowed Abbeville to finish the quarter on a 12-2 run. At the end of the quarter, Springwood trailed 20-2.

“I think we had 10 fouls in the first quarter alone,” Sampson said. “We missed three layups in the beginning and with the 10 fouls, they must have had 20 points on free throws in the first half alone and that did us in.”

Springwood answered almost every play that Abbeville had in the second quarter but started slow out of the halftime break. Midway through the third quarter, Abbeville’s lead was 30 points, which is where it stayed for the remainder of the game.