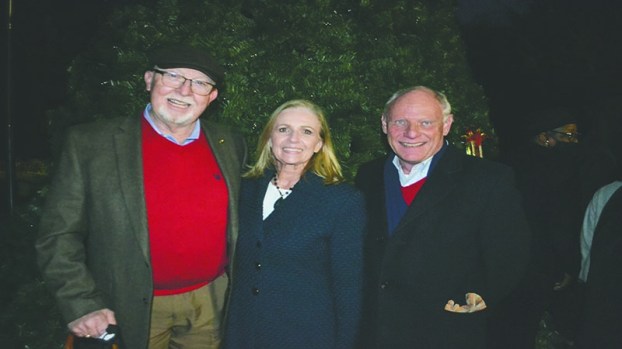 LANETT — State Sen. Randy Price spent eight weeks in the hospital battling COVID-19 this year. Most of that time was at the East Alabama Medical Center in Opelika fighting off the virus, then came some time at the EAMC-Lanier acute rehab unit learning to walk again. On Monday, he and wife Olene were special guests at the annual Lanett Christmas tree lighting.

Due to COVID-19 restrictions, a limited number of people wearing masks were inside Veterans Park. Most of those who came remained in their vehicles and listened to the program by means of Ronnie “Spanky” Sanders’s sound system. They stayed warm in their cars and heard a number of traditional Christmas tunes before the program started. Cars were parked along First Street, Eighth Avenue and on the W.O. Lance playground.

In introducing Price as the featured speaker, Mayor Kyle McCoy said that he was pleased the Prices had accepted his invitation to be there and that Price had agreed to speak.

“It’s an inspiration for them to be here with us, given what they have been through this year,” he said. “All of us have suffered with COVID-19 in some way. We have people here tonight who have lost loved ones this year due to it. We are honoring them this evening.”

Price thanked the mayor for the invitation to speak.

“I am so grateful to be with you in Lanett tonight,” he said. “We see this event as a celebration of life and a new beginning.”

During those long days in the hospital, Price said he’d been really touched by an article he’d read. His wife was being interviewed about their experience with COVID-19.

Price said that Christmas is the season for hope and for a new day.

“We should remember the real reason for the season,” he said. “It’s to celebrate the birth of our savior, Jesus Christ. Even in a bad year like 2020 has been, we should remember, in spite of all that’s happened, that God is good.”

That statement was met with a number of amens.

As Price was speaking, a group of people were gathered together to the right of the Veterans Park tree. They had lost the matriarch of their family, Natasha McCarley Hicks, to COVID-19 earlier this year. Price turned to them and said that everyone’s thoughts were with them on this evening.

“There’s always an opportunity for each of us to be a bright light in the lives of others.” he said.

Prior to him speaking, Tonya Frank sang a beautiful version of “O Holy Night.” Price said the words of the song had always appeared to him, especially the lines “A thrill of hope, For yonder breaks a new and glorious morn.”

“Let us remember every day,” he said, “that the hope Christ brings us is worth living.”

Price admitted to having reservations in talking about what he and his family have gone through this year, but that he was glad he did.

“I want you all to know that we are here by the grace of God,” he said. “I wish each one of you a Merry Christmas and a happy New Year. May God bless you in every way.”

Price was then given the honor of lighting the 25-foot-tall tree. He pushed a small red lever, turning on all its lights. Applause and lots of oohs and aahs followed.

Price then met with the Hicks family and had photos taken in front of the tree. Among those present were Hicks’ daughter, Shanece; son, Keshawn Hicks; her sister, Hannah Ridgeway, and Ridgeway’s daughter, Trameka Cooper.

The program concluded with Tonya Frank singing “Have Yourself a Merry Little Christmas,” a song written by native Alabamian Hugh Martin in 1943. The song was popularized by Judy Garland in the 1944 movie “Meet Me in St. Louis.”