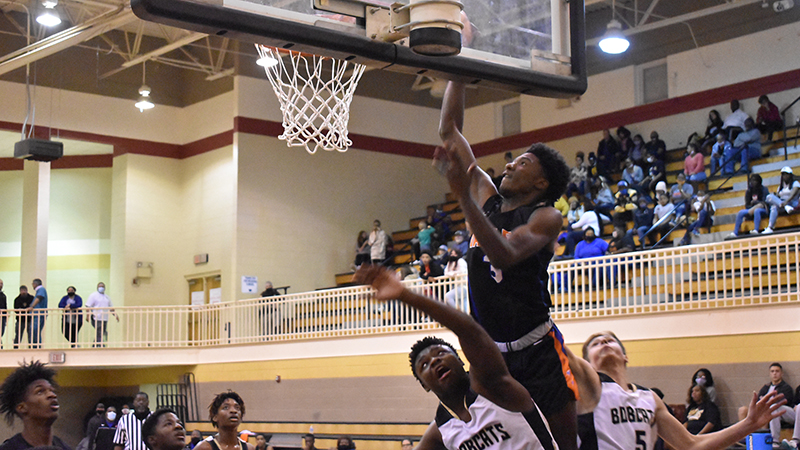 For the first four minutes of the game, the Beulah boys basketball team was able to hang around with Valley, but Valley calmed down and started to execute its gameplan for the remaining four minutes of the first quarter, building a double-digit lead that catapulted the Rams to an 89-17 win against Beulah.

In that first quarter, the game was tied at six with four minutes left in the quarter. After Valley head coach Marshon Harper called a timeout to calm his players down, the Rams finished the quarter on a 16-2 run to finish the quarter.

“We were 6-of-25 from the free-throw line, so I told them to just settle down, execute our offense and execute our defense,” Valley head coach Marshon Harper said.

Valley continued its onslaught in the second quarter, outscoring Beulah 25-6 in the quarter. For most of the quarter, Beulah struggled to get the ball to the Valley side of the floor because the Rams’ press was causing so many turnovers. Most of Valley’s 25 points in the quarter were scored off a turnover.

In the second half, Valley allowed just three points, while scoring 42. Once again, the Rams’ defense caused problems for the Bobcats. When they were able to get across half court, the Bobcats struggled to score, finishing most possessions with a turnover. The clock ran the entire fourth quarter.

In the win, Valley changed up its starting lineup a little bit, putting some younger players in to start the game instead of some seniors. Harper said it was to give some players more minutes and get everyone to learn his system.

Senior Quez Trammell had an explosive night offensively. He finished with his second double-double of the year, finishing with 10 rebounds 13 points, four of which came off two incredible dunks. In the first quarter, Trammell soared above two Bobcats and threw down a powerful one-handed dunk. In the third quarter, Trammell once again soared over a defender, throwing down a dunk off a missed shot.

“The sky is the limit for the kid. He’s an unbelievable talent,” Harper said.

Valley will play Booker T. Washington on Saturday, while Beulah will travel to Dadeville.