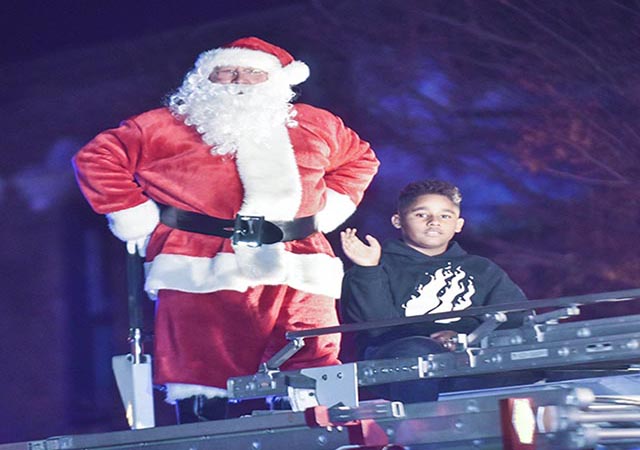 On Thursday, Highway 29 was shut down as trailers, busses and every sort of truck and car possible drove down the road, starting in downtown West Point and ending about four miles away at the Valley Walmart for the 2020 Valley-Wide Christmas parade.

Overall, there were 54 entries in the parade, nine of which were selected as the top three entries in three categories — business, community and school.

In the business category, Kandies Hand Creation finished as the best entry, winning both the most creative and best Christmas spirit categories.

“I went into the store and just decided, I’m going to do Candy Land,” Kandies Hand Creation owner Kandricka Walker said. “I talked with my nieces, and they were cool with it. I talked to my sisters and my mama. We just all got together and did it … I like Christmas, and [it’s] just [a way to] have fun with the kids.”

Walker has been entering the parade the last few years, but Thursday was the first time her entry has finished first.

“I feel great. It’s a blessing from God,” Walker said.

The grand marshal for this year’s parade was Joylin Peters. She’s a registered nurse in EAMC-Lanier Hospital’s medical-surgical area. She represented the hospital’s front-line workers.

Peters said that 2020 had been a very difficult year for healthcare workers throughout the U.S. and world.

“There has been so much uncertainty about COVID-19, when would it end and could we ever get it under control?” she said.

She said it had very hard just to put on the personal protective equipment (PPE) on a daily basis.

The best way to fight the pandemic is to be careful and not get it in the first place.

“People need to take precautions,” Peters said. “Wear a mask when you are away from home, avoid large gatherings and practice social distancing. Wash your hands whenever you can.”

Peters, who has been at EAMC-Lanier for the past four years, said that having a vaccine would be a big step toward getting back to normal. “It definitely will help, especially with those who are vulnerable,” she said.

Healthcare workers, first responders and nursing home residents will be among the first to be vaccinated once a vaccine is approved and widely distributed.