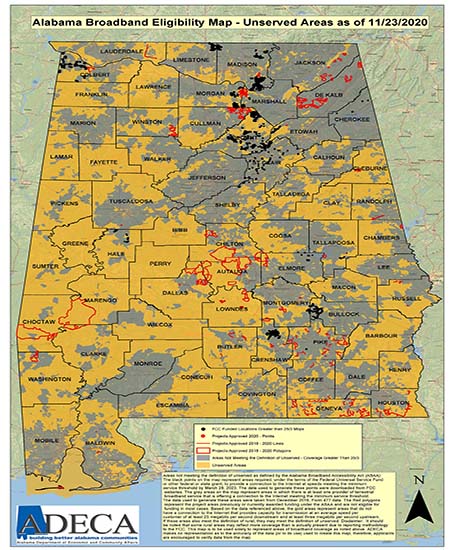 Gold color illustrates areas that are currently unserved by broadband.

The lack of broadband has handcuffed many portions of Chambers County, but the Chambers County Development Authority’s Director of Commercial & Community Development, Chris Busby looks forward to bridging that gap. Approximately 75 percent of the county’s geographic territory is unserviced by broadband. Busby said it is difficult to accurately say how many people are in areas unserved by broadband.

Using both federal and state grant opportunities, Busby says the overall goal is to bring broadband to the entirety of Chambers County.

For starters, Busby said Point Broadband Fiber Holding, LLC and Tallapoosa River Electric CO-OP (TREC) entered into a Memorandum of Understanding in early 2020, that allows Point to run broadband on TREC lines. With that in place, Point Broadband Fiber Holding, LLC was able to submit a bid as a part of the Federal Communications Commissions Rural Digital Opportunity Fund (RDOF) Phase I auction.

According to the FCC’s website, RDOF is part of a broader effort by the FCC to close the digital divide in rural America and focus limited universal service funds on unserved areas that most need support. A total of $20.4 billion will be awarded over a 10-year period. Up to $16 billion has been made available for Phase I of the Rural Digital Opportunity Fund auction, and the remaining Phase I budget, along with $4.4 billion, is being awarded for Phase II of the auction.

To enter the auction, bidders were required to select a speed tier established by the FCC. The allowable minimum speeds were 25 megabits per second for downloads and 3 Mbps for uploads.

On Dec. 7, 2020, the FCC released the winners of a confidential auction, which included Point Broadband.

“It is safe to say that Point has achieved their goal of getting a pretty substantial amount to start the build out into rural East Alabama, specific portions in Chambers County,” Busby said. “We can say that, yes, 51 million is dedicated towards East Alabama.”

Point Broadband was awarded a total of $78 million for work in five states — Alabama, Georgia, Michigan, New York and Virginia. In addition to Chambers County, Point was awarded funding for work in Barbour and Calhoun counties.

All winning bidders must file a detailed application with the FCC between Jan. 14 and Jan. 29, 2021. Applications must include deployment plans specific to their RDOF awards and areas to be served. Over the 10-year disbursement of funds, the RDOF has set service milestones that include reaching every location assigned by the end of year six. Details on the build-out are unclear at this time and will be made available by Point Broadband upon completion of this stage of the process.

A full list of the  Auction 904 Winning Bidders is available on the FCC website. To locate which census tracts are included in the project, you can go to the FCC public reporting system.

This project has not come without some obstacles, however. A portion of the area commonly known as Fredonia was deemed ineligible because Knology WOW under the business name of Knology of Alabama filed data with the FCC stating they currently serve broadband in this area. But, Fredonia residents feel this is not accurate and the process has begun to dispute these claims.

Busby along with former Chambers County 911 and Emergency Management Director Donnie Smith approached the Chambers County Commission to request a letter of support, which was unanimously approved. Letters 0f supports like these will aid TEC of Roanoke if this area is deemed to be unserved, allowing the company to file grants and bring broadband into that area.

“If you look at ADECA’s website, they have an interactive map tool,” Smith said. “It shows some 60 census tracts that roughly comprises what we commonly call the 499 telephone exchange in the Fredonia community. Knology WOW under the [doing business as name] of Knology of Alabama has been reporting to the Federal Communications Commission that they provide broadband internet to those 60 census tracts. Those of us that live up there know that simply is not true.”

Smith contends that residents in Fredonia get WOW DSL at most.

Busby said there is a dispute process to get this data corrected so that this area can be eligible for grants down the line.

“The first thing that we’ve done is we’ve reached out to some contacts in the FCC, to put it in basically a formal dispute that we claim is not being served. And then we’re also going to ADECA  and telling them to review this service territory, basically submitting a dispute as well,” Busby said.

In a statement to the Valley Times-News, Debra Havins, Senior Director, Corporate Communications at WOW! said, “WOW! has received confirmation that the necessary revisions for this dispute have been filed with the FCC.”

When asked about what benefits this would bring to Chambers County, Busby immediately pointed to education.

“Kids are working from home, they can’t do their homework, they can’t Zoom with their classmates. Even if we’re not in a pandemic, so much of education now is online. So that’s critical to be able to provide our students with the ability to effectively do their education work,” Busby said.

“The biggest thing for us as an economic development entity is the effectiveness of business. We cannot locate a company anywhere that doesn’t have broadband. That’s just the way their businesses flow,” he said. “It’s absolutely critical in order to attract new business, and no one’s going to go where there’s not broadband.”

The availability of broadband is also essential for attracting new residents.

“We can attract residents who don’t want to live in big cities, but you know, they can still work if they have that access to broadband,” Busby said. “We are all extremely excited about this. And, the fact that we know we’ve got this money is just a huge economic benefit.”

Busby also said he has been in discussion with the Chambers County Commission about bringing in community hotspots.

“I got information from the school systems as to how many students do you have enrolled that don’t have access to broadband. And there was obviously a decent amount that didn’t, but there are also some who were in areas that had broadband access, but financially, were not able to afford broadband,” Busby said. “So that’s another issue that needs to be addressed.”

Busby says if someone cannot afford broadband service they can log on to community hotspots, but he said that is further down the road.

“That’s something that’s critically important because we’ve got to get the infrastructure in place to do it first,” Busby said.