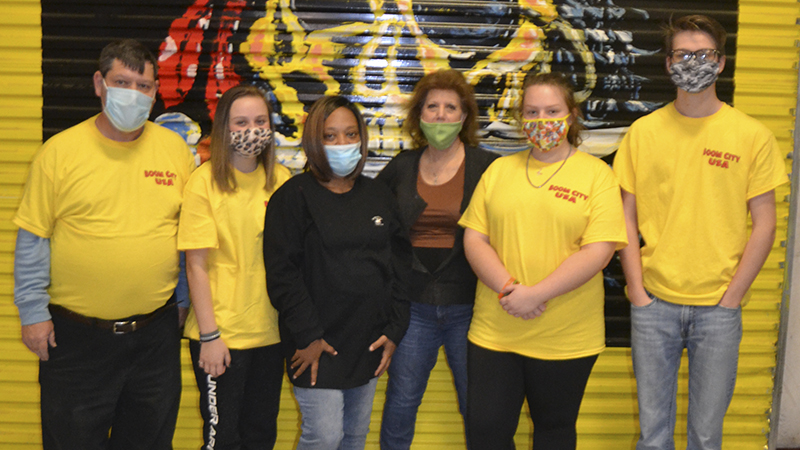 LANETT  — Boom City USA has two very busy days each year, July 4th and New Year’s Eve. Located off Exit 77 off I-85, the fireworks warehouse draws customers from throughout the two-state area.

Store Manager Marsha Pickens told The Valley Times-News that there’s just no way to predict the way fireworks are going to sell from one holiday to the next. The main thing is to be prepared for the rush.

With the COVID-19 pandemic affecting the entire nation, and the world for that matter, the pace of business could be way up or way down.

It was surprisingly good over the July 4th holiday.

There could be a stay-at-home factor in this. Rather than shooting off or watching fireworks at a gathering, people are doing it at home in smaller family groups.

“This is a large building, and we can put a lot of fireworks in it,” Pickens said on Dec. 30. “We just about sold out from wall to wall on July 4th. It took us a long time to restock, but we’re ready for a big day on New Year’s Eve. That one day tells the tale of how we did on our second big day of the year.”

She’s very pleased with the staff of young people she has from the Valley area.

“We have eight cashiers from the local area, and they are really good at what they do,” she said. “We simply couldn’t do what we do without them. They are good kids, and we are glad to have them.”

In addition to running the cash registers, the staff escorts customers out the side door after they have made their purchases, and they work the parking lot to see that everyone has no trouble parking their vehicle and exiting out onto Phillips Road when they leave.

One of the top sellers for the past 15 years is a brand known as Loyal to None. As long as it’s popular, Boom City USA is loyal to it and its snarling pirate logo.

What makes Loyal to None popular is its 33-shot grand finale.

Gone but not forgotten is Boom City’s mascot, Wilton, which is a giant blow-up gorilla that once sat on the top of the building. Wilton has now gone into retirement, and he’s more of an art object now. There’s a painting of him on the outside of the building, and that same image graces the t-shirts worn by the staff.

“It was an adventure having Wilton on top of the building,” Pickens said. “When a big gust of wind came by, he’d often get blown off the building.”

It must have been a sight to see the huge King Kong-like gorilla sailing through the air across Phillips Road and landing in the field near the historic Huguley family cemetery.

“Once, Wilton was blown a good distance from the store and landed on a cell tower,” Pickens said. “We got him down, sewed him up and put him back up on the building.”

“He’s a great guy and a good sport,” Pickens said. “He loved his namesake.”