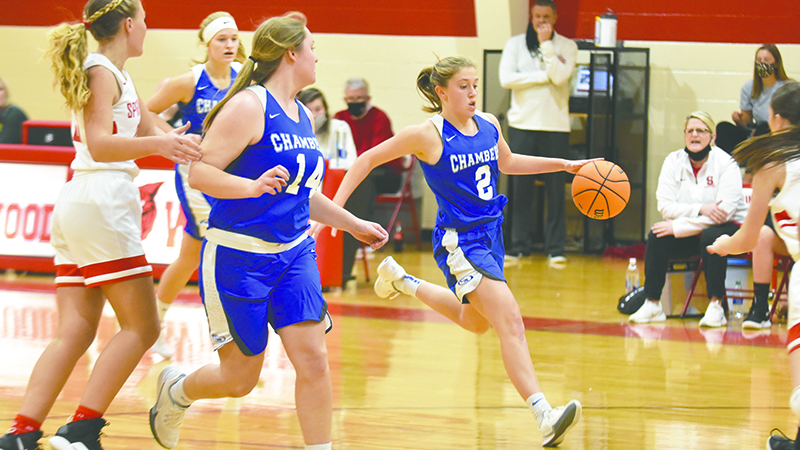 Chambers Acadmey point guard Claire Allen drives to the rim in the Rebels win against Springwood. Allen finished with a team-high 10 points in the win. --File Photo

Even though the Rebels had played for a state championship in February and six of the eight girls returned to the court, Chambers Academy’s girls’ basketball team had some question marks entering the new season.

Mainly, they needed to know who would handle the ball. Claire Allen, a junior, has answered the call.

During its playoff run last year, Chambers was led by Shelly Keebler, who ended her season really well. Her twin sister, Lizzie, was the team’s backup point guard and the first player off the bench. They primarily handled the point guard duties, but Allen was the team’s third ball handler.

Now, Allen has stepped up as the Rebels’ primary ball handler.

“I learned a lot being under the seniors last year,” Allen said. “We had Lizzie and Shelly graduate. I knew that I had to step up this year for my team because dribbling is something that I worked on in the offseason. I have such a good team, and I can pass it to anyone and they can be open for a shot.”

During the summer, when she wasn’t participating in cheerleading or volleyball practice, Allen was working in the gym, focusing primarily on her dribbling. She said that ball handling is the part of her game with the biggest improvement from a year ago.

Playing volleyball also helps Allen in basketball, as she can be seen dribbling a volleyball during practice, games or while she’s waiting to warm up.

Allen also competes against her brother, Payton, in the gym whenever the pair find time to play. Payton is a standout on the Rebels’ boys team and has led it to two state championship appearances in the last two years.

“It helps a lot. He’s a really good player,” Allen said. “I really enjoy my dad and my family supporting me.”

Chambers stumbled to start the year, losing its first two games, but finished the year 2020 strong by winning its last five games. A big reason for the turnaround is the team and Allen getting more familiar with their roles.

“It’s starting to grow on her more and more as she plays,” Chambers Academy head coach Jeff Hines said. “She played really well last year down the stretch. She’s not at that level yet, but she’s making progress.”

Along with players taking up new roles, the Rebels have some newer faces that are key contributors that are getting into the flow of the game.

“It’s been a lot of fun. All the girls are really close with each other, and we love to see each other do the best we can,” Allen said. “I’m really excited heading into region play. I think we have a really good shot.”

Even though there are three new players that contribute solid minutes, the team already has good chemistry, since the three players all played volleyball with all but one player that returned from last year’s team.

In Chambers’ last game of the year 2020, Allen had a big game, finishing with 10 points in the Rebels’ win against rival Springwood. Along with leading the team in scoring, she put her teammates in a position to score, driving into the lane and passing to a teammate as soon as the Wildcats sent help.

“We’ve talked about taking advantage of penetration gaps. She’s been getting the ball in too deep, but [Dec. 21], I thought she did a really good job of keeping it right around the free-throw line,” Hines said. “She has a high IQ. She can see the open player and makes good passes.”