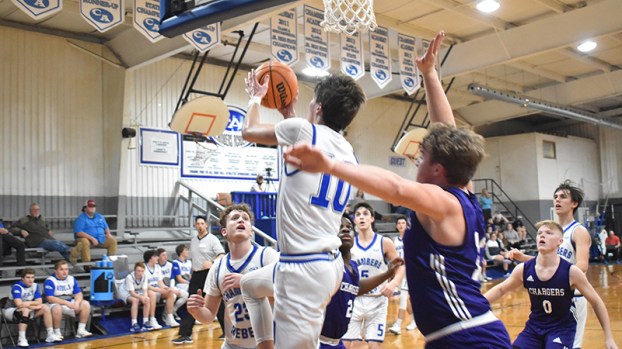 Chambers quickly delivered a knockout blow to Cornerstone in the boys’ game.

In the first two minutes of the game, Chambers knocked down four shots to build a 9-3 lead. Cornerstone had slowed the ball down enough to make Chambers play in the half court for most of the opening minutes, but the Rebels were making shots when given the opportunity. After the first two minutes, Chambers started to force turnovers, allowing the Rebels to run in transition as they usually try to. In the final six minutes of the first quarter, Chambers outscored Cornerstone 19-2.

“We were just getting and running,” head coach Jason Allen said. “We’re best when we get in transition. I was more pleased with the way we played on the defensive end. We were making it very hard for them, giving them one shot. Then we get the ball and go. I was tickled with that. We played pretty well tonight. We were a lot better basketball team than they were, but I still thought we played well. You can win and not play well. We executed at a high level.”

The Rebels continued to force the Chargers to play at their tempo in the second quarter. Most of the Rebels’ 24 points scored in the quarter were scored in transition. Defensively, Chambers allowed just three points.

In the first half, Cornerstone made just three shots from the floor.

Cornerstone’s most successful quarter was the third, as it scored 13 of its 30 points in the quarter, but Chambers doubled that production, scoring 26 points.

Monday’s game was one of four that the Rebels will play this week. On Tuesday, Chambers travels to Lee Scott for the second game. It will also play Springwood and Hooper.

“I hope this is the beginning of a good week. If we can score tomorrow like that, we’re going to be very tough to beat because our defense is where we hang our hat,” Allen said. “I hope we’re rounding into form as we head into the playoffs.”

For most of the season, the first quarter has been a struggle for the Rebels. That trend continued on Monday,... read more