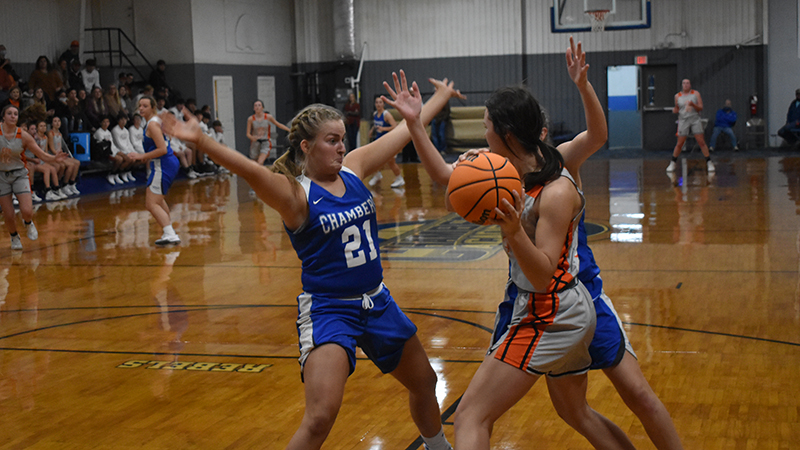 After defeating Springwood in its final game of 2020, Chambers Academy girls basketball head coach Jeff Hines said that he likes to split a season into three parts — before Christmas break, after Christmas break and the playoffs.

Hines’ team finished the first half of its schedule 5-2, winning its last five games of 2020. The Rebels extended that winning streak into 2021, as they handily defeated region opponent Macon-East 53-35 on Tuesday night.

“We’re 1-0 in the second part,” Hines said. “This team is improving game after game, practice after practice.”

The win also gave the Rebels their first region win of the season, giving them a 1-0 region record.

“It’s huge to start 1-0 in the area,” Hines said on Wednesday. “As I was telling the girls today, you have to defend your home court. My philosophy is you try to steal them on the road. We’re going to try to steal two on the road.”

Even though it led by five after 16 minutes, Chambers struggled in the first half. For the game, Chambers shot just 28 percent from the floor, most of which were near and around the rim.

The No. 6 team in the AISA struggled, especially in the first half. Along with the shooting, the team wasn’t executing its plays as well as Hines wanted. That changed in the second half.

“I thought the first 16 minutes, we played hard, but we didn’t execute. I don’t know if it was [because it was the] first game after the holidays or what, but we just didn’t look like ourselves,” Hines said. “The execution was maybe as well as we’ve had all year in the second half last night. We made the extra pass, which was to the open man to take the open shot, and we finished. We started seeing players that were open.”

While the Rebels are struggling to score consistently, Hines has been really impressed with his team’s defense, as poor offensive nights don’t change the defensive intensity each night.

“We’re really struggling shooting the basketball. However, we are defending at a very high level, and it’s the difference in games,” Hines said. “These girls don’t let their offense dictate how they are going to play offensively. That’s huge for us.”

Chambers will face a tough task on Friday when it hosts Lakeside. The Chiefs are 5-3 this year and one spot ahead of the Rebels on the Alabama Sports Writers Association’s basketball poll.

“It’s going to be a war,” Hines said of Friday’s matchup. “Lakeside is really good. I scouted them on film today. They’re talented, they’re fast, they’re long and well coached. I told the girls that we’re going to have to bring our A-game, and we’ll have to play for 32 minutes. We can’t [fail to] execute the first 16 minutes and expect to be in the game at halftime.”

While Friday’s matchup is big for the Rebels playoff chances, Hines said the Lakeside game is big because it is the next home game.

“We need a great crowd to show up. We need them to be loud because our girls feed off it,” Hines said. “We had a tremendous crowd last night. I can’t thank our fans enough for being here. We have to have that same energy and that same crowd to help us out on Friday night.”