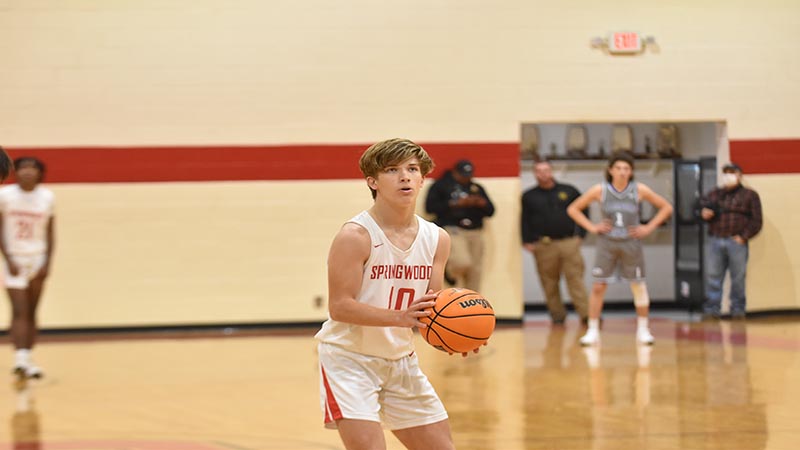 The Springwood boys basketball team enters its 2021 schedule coming off a high note, as the Wildcats defeated Chambers Academy in an overtime thriller that came down to the wire.

“We’ve won some tough games and lost some games that have gone down to the wire,” head coach Lisa Sampson said. “The chemistry is good. If one guy is having an off night, another guy is going to step up. The goal is to get everyone playing at the same level for these region games… We’ve just got to be focused and ready to execute on what we can do.”

The two losses were against two of the best teams in 3A in Glenwood and Pike Liberal Arts. The Pike Liberal game came down to the wire, while the Gators got an early lead and foul trouble hurt the Wildcats’ ability to come back.

One key player in those nine wins has been senior guard Will Craft.

Craft is one of the few players that was on the varsity Wildcats team a year ago. This past fall, Craft was on the Wildcats’ football team, so it took him a little bit of time to get back into the flow of basketball, but he is now excelling for Sampson.

“Will was a football guy, so he missed the first part of it. I think that put him a little behind,” Sampson said. “As you can see, he’s earned [his minutes]. He’s back in the starting rotation.”

The biggest part of Craft’s game that Sampson takes note of is his defense, which is the catalyst of the Wildcats’ offense.

“He gives this team energy with his defense,” Sampson said. “He’s having a great year.”

While on offense, Craft is a complementary piece to the other starters around him.

When he’s on the floor, Craft is normally one of the Wildcats’ ball handlers. Against Pike Liberal, Craft showed that he could knock down the 3-point shot with some consistency. Against Chambers, Craft showed that he could step up and hit big free throws. One of the biggest parts of his game is the senior’s ability to make the right read, as he rarely will finish a possession with a turnover.

“That’s just a testament to the work they have put in,” Sampson said. “The challenge there is to keep everyone grounded and not worrying about that stuff. Just play ball and that stuff takes care of itself. We really want to work hard too to give those kids the opportunity to play at the next level. That’s something, coach Mike [Jenkins] and myself, we feel that is part of our job and part of what we’re here to do.”

Springwood’s first test of 2021 is Lee Scott. The Wildcats could win their second area game of the year on Thursday.