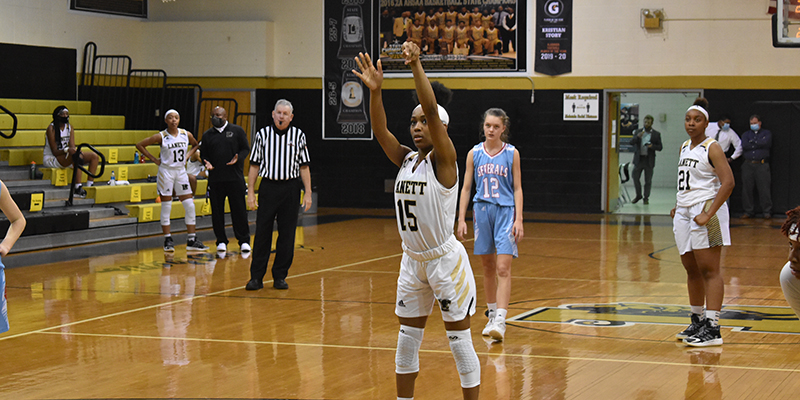 With a stint in quarantine and two road games to start its 2021 schedule, it had been a little more than a month since the Lanett girls basketball team had played a game at home. With a strong second half and defensive performance, Lanett defeated Horseshoe Bend 58-36.

“It’s been rough. We’ve been dealing with a lot of stuff that’s out of our control,” head coach Charlie Williams said of the last month. “The girls have been great.  They’ve stayed in constant contact with each other and myself. They were eager, and now we finally got a chance to start playing.”

“[I mainly saw] energy. That’s the main thing,” Williams said. “We’ve been out a month and a half, I told them that you weren’t going to walk in the gym and be the same team we were when we stopped playing. We haven’t been playing against anyone. Playing against each other in practice is good but you pretty much know where people are going to be. I just told them to play with energy. Even if you make a mistake, make it full speed.”

Lanett’s defense was effective throughout the game at making turnovers and getting stops. For the most part, the only time the Generals were able to be productive on offense was inside the paint in the second quarter. They were able to find gaps around the rim and were able to exploit them.

A contested 3-point attempt gave Lanett a six-point lead heading into the second half.

For the final 16 minutes of the game, Lanett was in full control.

Williams was extremely impressed with the team’s passing on Monday, as the Panthers usually took an open shot in the second half. This included fast-break opportunities, as the player that forced the turnover rarely finished with the score but got an assist.

“They share the ball so well, I love that about my team,” Williams said. “Sometimes I have to fuss at them because they overpass. Sometimes they’ll have a layup, but they pass it to their teammate so they can get a better shot. I preach the extra pass at practice.”

Lanett improves to 5-2 on the season and 4-1 in its area, as Randolph County forfeited both of its area games against the Panthers.

Breanna Glaze finished with a game-high 19 points, while Samahriah Davidson finished with 10 points. Eight of the Panthers scored at least one point in the game.

Lanett travels to Handley on Tuesday for its next game.