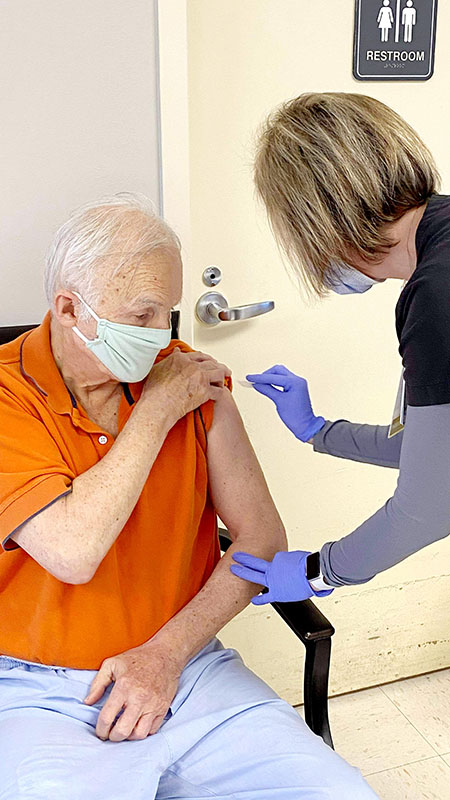 VALLEY — Tuesday was a big day at EAMC-Lanier Nursing Home as a total of 63 of the nursing home’s 79 residents received the first part of the Pfizer vaccination for COVID-19. They will receive the follow-up shot in three weeks. By Valentine’s Day, they could have confirmation of immunity from getting a deadly virus that’s killed more than 350,000 Americans since last March.

“We offered to vaccinate all of them,” said Nursing Home Administrator Alison Yarbrough, “but some family members wanted to wait for now and perhaps have them vaccinated at a later date.”

Yarbrough said most residents were excited about being vaccinated.

“They knew how important it is for them to be vaccinated and wanted to do it,” she said.

“The pharmacist had talked to our residents and their family members about getting the vaccine and the protection it would offer,” Yarbrough said. “Some of our residents didn’t receive it Tuesday because they were a little under the weather. If they wish, they can receive it later when they are feeling better.”

Residents with dementia could be vaccinated providing their sponsor (a family member or close friend) approved it. Eve Milner, EAMC-Lanier’s vice president of clinical/senior services, sees widespread vaccination as the major step in getting past the threat posed by COVID-19.

“What happened Tuesday is a glimmering light at the end of the tunnel,” she said. “It’s a big step to have vaccinated 63 of our 79 residents at the nursing home. Some of our residents’ sponsors didn’t respond when contacted about the vaccinations that were being offered. We hope when word gets out about what we are doing they will provide permission to do it. We want to vaccinate as many people as we can. It’s your best protection against the continuing spread of COVID-19.”

Yarbrough sees vaccinations as an important step to take in getting back to normal.

“We haven’t had indoor family visitations since March,” she said. “They can now visit their loved one outside in the patio area but not inside. We won’t be able to do that until the infection rate is down. It has been increasing in recent days in Chambers County.”

Yarbrough has been the nursing home administrator since January 2018. She’d previously been a nurse at Lanier Memorial and EAMC-Lanier for 17 years.

Vaccinations in Alabama are being administered according to a state plan. Those being vaccinated in Phase One are critical healthcare workers and residents of long-term care facilities. Phase 1B includes people who are age 75 and older, first responders and law enforcement officers and those who live or work in congregate settings including but not limited to homeless shelters, group homes and prisons or jails.

Phase 1c includes people in the 65-74 age group, and those between 16 and 65 with high-risk medical conditions.

Phase 2 covers all persons in age groups not previously recommended for the vaccine and the general population not included in the earlier phases.