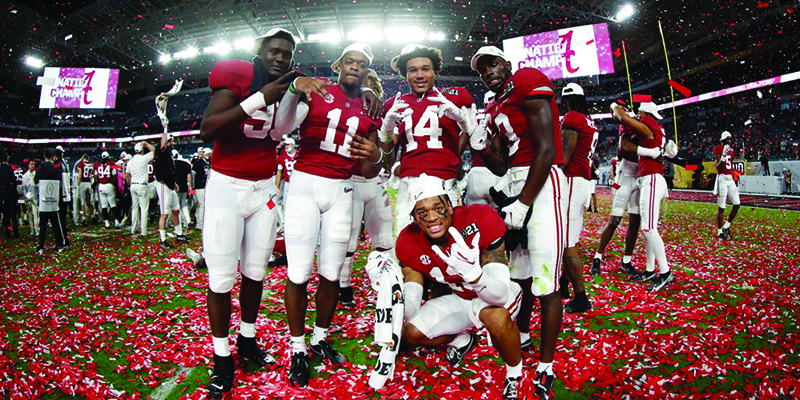 Kristian Story is running out of fingers to put his championship rings on.

“It was an awesome experience,” said Kristian’s father, Clifford Story. “I just had a lot going through my head when we entered the stadium. I was just thinking when he was a little boy playing rec ball. I was having flashbacks of him in the sixth grade saying that he was going to play for Alabama. When we dropped him off at school, he said Alabama was going to win a national championship. All of that was going through my mind and seeing that all unfold in front of me was just an awesome experience.”

Now, he has a college football national championship.

Growing up an Alabama fan, playing for the Crimson Tide was always a dream for Story. He signed his official letter of intent on Dec. 18, 2019.

“To see our son on the field, it was just an amazing experience,” Kristian’s mother Krisse Story said. “We won two football state championships at Lanett, but this was on another level. It took my mind back to when Kristian was a little boy. He just has a way of manifesting what he wants to see. If he says something, it just tends to happen. That’s what he’s done. He said he was going to play at the University of Alabama and he is. He said they would win a national championship and they did.

“This was a tough year, with us losing Quae [Houston, Story’s cousin that was as close as a brother], he only went in a game for a couple of seconds… to see how he held it together and cheered on his teammates, he’s matured so much.”

Story was a reserve as a freshman this year after starting for his father at Lanett since he was in the eighth grade.

Story should make an impact during the 2021 season playing either in the secondary or on special teams, as the Alabama secondary could have several changes as three starters are eligible to go to the NFL Draft.

Story is the first player from Chambers County to win a national championship since 2017. Valley alumni Bo Grant, who was a walk-on on Alabama, was on the team that defeated Georgia in overtime in the 2017 national title game.

The Storys had a chance to get together before the game, but they didn’t meet in person after the game. During the celebration on the field in Miami Gardens, Story found his parents and gave them both a shirt to take home.

“It was so funny to watch, just seeing him so excited,” Krisse said. “He did the same thing in Atlanta [for the SEC Championship game]. For him to come over and throw it over, it was his way of saying thank you for giving him that opportunity and what we’ve done for him. We definitely thank him for the opportunity that we’ve got. We’ve never been to a national championship, and we probably wouldn’t have been able to if it had not been for him playing there.”

“When he ran over with that shirt, I just teared up. I’m not that emotional of a guy, but I couldn’t handle it,” Clifford said.

Clifford said that he plans to make a memorabilia box with some of the items Kristian has given him this year. He will get the shirt signed by Kristian and framed, the gloves, the shirt and a hat that he will keep moving forward.

Kristian will return home this week to spend time with his family.