Holliday stepping up as leader in senior year 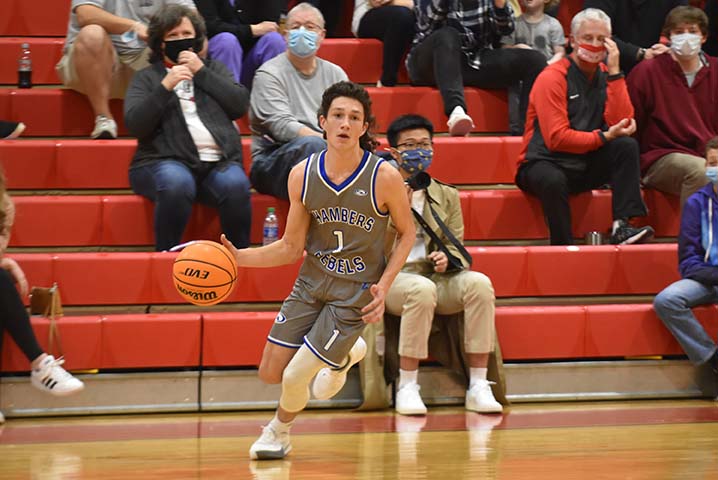 The Chambers Academy boys basketball team has raced out to an 11-1 start this season and an area championship.

One of those homegrown players is senior Josh Holliday.

Holliday has started the past three years for Chambers Academy. The past two years, Holliday was one of the Rebels best three-point shooters. He showcased his shooting ability in the 2020 championship loss to Evangel, knocking down three 3-point attempts and scoring 11 of the Rebels final 15 points in that loss.

“We should have gotten him more shots in that game,” head coach Jason Allen said. “He’s an excellent shooter, and he has beautiful form. We’ve worked on that over the years, that’s not by accident. He’s a pretty good three-point shooter, and he has a pretty jumpshot. He and Payton [Allen] are the two guys that we’ve leaned on the last several years. They understand how our program works, and the other guys have leaned on them.”

During the summer, Holliday was either working, working out with football or training in the gym. In the gym, he worked on ball-handling and his shot, working with the Rebels coaching staff and other players in the gym trying to sharpen his ability to stretch the floor.

For Jason Allen, the ball-handling and shooting growth is a smaller part of Holliday’s jump from junior to senior season.

“He’s grown into a leader this year,” Allen said. “He accepts coaching. He doesn’t pout. He understands what we’re trying to do. He’s like a coach on the floor because he’s been with me for so long, this is his third year as a starter. He’s really improved his game other than scoring. There were times if he wasn’t scoring, he felt like he wasn’t contributing to the team. That’s one of the hardest things for players to understand. They can’t feel like they’re only contributing when they’re scoring because there is so much more to the game of basketball.”

This year, Holliday has made an impact in several areas. He is averaging eight points, four rebounds and 1.7 steals per game.

With all of the newer players on the Rebels 2020-21 season, this adds a lot of depth, allowing Allen and Holliday to rest more than they have in past years. Most of the time last season the only time Holliday or Allen came off the floor was when they were in foul trouble.

“It’s been fun,” Holliday said. “We have a lot more players this year, so we’re getting to sub out. I’m getting more of a break, so I’m not out there dying on the court. I think we have a really good chance this year.”

With the Rebels already claiming an area championship, they are one of the four first seeds in the AISA AA Playoffs, giving them a first-round bye for the second straight year. That playoff game will take place on Feb. 6.