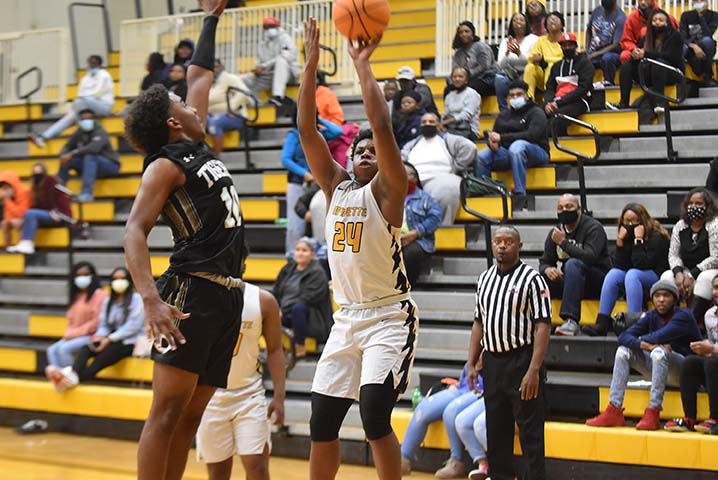 After struggling to find a rhythm the first couple of weeks this season, the LaFayette boys basketball team was hitting its stride. The offense started getting into a rhythm, and the team was picking up wins.

On Jan. 5, the Bulldogs traveled to Dadeville and avenged an earlier season loss. The win gave them a three-game winning streak heading into additional area games.

“We were able to play, so we made some leaps and bounds being on the road and overwhelmed,” head coach Obadiah Threadgill said. “We came back to Beauregard and Dadeville, then caught Randolph County. These teams aren’t presenting any equations that we haven’t seen yet. Whether we can beat these teams, that’s a different story. With us being comfortable and finding a rhythm for ourselves and playing our game, that’s what I’m impressed about … Our kids are showing glimpses, we just have to be more consistent.”

Then, the school district shut down for five days, canceling all classes and extracurricular activities. The Bulldogs, who were coming off one of their biggest wins of the year, had to wait to get back into the gym.

They got one day of practice as a team before traveling to Randolph County for their second area game of the year. The stoppage and a key injury slowed their momentum, but the Bulldogs gutted out a 34-24 win on the road.

“Coming off that five-day hiatus, we just went out there and just played. [We] tried to just play our way back into shape. It doesn’t take a whole lot of time to lose the progress that we’ve made,” Threadgill said. “Our kids fought hard. We were hitting a groove before the county shut down, but this season is going to be about disruption. We just have to remain flexible and go with the flow, just like everyone else.”

The key to the win was using Jay and Ty Daniel’s athleticism to the Bulldogs’ advantage. They were able to speed up the game, which was difficult for Randolph County to match.

Tuesday’s win shows the growth the Bulldogs have shown this year. A few weeks into the season, a close game usually went in favor of LaFayette’s opposition.

Along with the ability to close out close games, the Bulldogs have done a better job of working on their body language during games. Early in the season, some players had trouble hiding their emotions on the court compared to when they were on the football field.

“Guys are reacting like they’re on the football field. This sport is much more intimate than football,” Threadgill said. “The referees can see your body language and the crowd and your teammates can see everything. Just getting guys to compose themselves and not be so emotional but play with passion [is big]. To get guys game reps with the power and strength of varsity basketball, it’s just a little bit different for a guy that’s been playing pickup or playing B team. It’s just so much faster and so much more physical. Guys have to be able to embrace that part of it.”

LaFayette faces a tough week moving forward, as it faces 6A Opelika and 6A Valley. It lost by 35 points to Valley in the first meeting of the season.

“This week is going to be one of those weeks that you have to walk over hot coals without socks and get your feet burning a little bit and build some callus,” Threadgill said. “We know that it’s just part of our process. As much we want to tell them and show them, they have to kind of walk it on their own. It’s something that they have to experience for themselves. They’ll be way better for it in the future.”