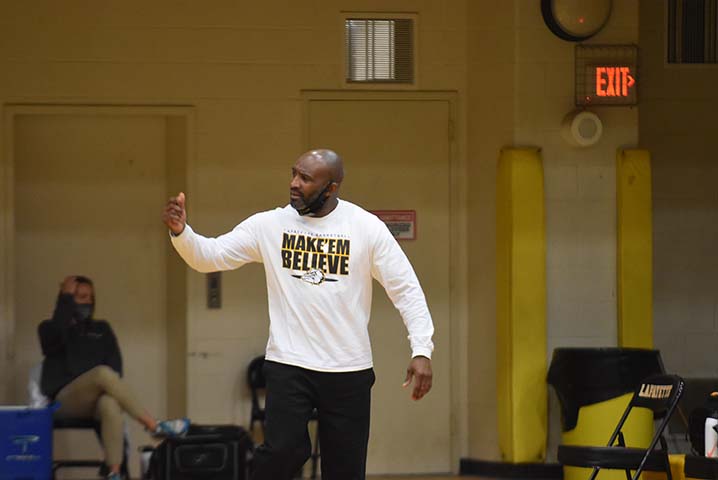 After struggling to start quickly in both of their previous games, the LaFayette and Valley girls basketball teams wanted to be quick out the gates in Saturday’s game. However, the trend of slow starts continued, and the more experienced Bulldogs pulled away in the fourth quarter to defeat Valley 55-36.

“We started off very slow, and we played sluggish for the first three quarters,” LaFayette head coach Fred Bridges said. “We have some key injuries going into the game. In the fourth quarter, we just turned it up and pulled away.”

Defense was the key to the opening quarter. Both teams harassed ball handlers, forcing turnovers and allowed very few open shots in the paint.

“The only way to combat that is to take care of the ball,” Bridges said. “It’s just the mental mistakes that we’re making, and we have to fix those getting into area play the next two weeks.”

The two teams were pretty much deadlocked during the first quarter. LaFayette found room along the arc to hit a pair of 3 point shots, but overall it hit just four shots in the quarter. Valley scored seven points in the quarter, hitting only two shots from the floor.

There was even less separation in the second quarter as LaFayette scored just one more point than Valley in the quarter. All eight of the Bulldogs’ points were scored by senior Feliah Greer.

Both offenses woke up in the second half.

In the third quarter, LaFayette leaned on Geer and Ebony Williams, two of its veteran leaders. Greer started to take over the game, powering her way into the lane. She scored nine points in the quarter, while Williams knocked down a pair of shots from 3-point range.

Valley did a better job of taking care of the ball in the quarter.

“At times, we were a lot better executing and being more patient. We started to find our foothold to see what we could do on offense and what we can’t,” Valley head coachGeorge Grimes said.

Since they weren’t turning the ball over as much, the Rams got into their offense and found success. They hit three 3-point shots and got inside, hitting three shots in the paint.

Unfortunately for Valley, LaFayette was in a groove. The Bulldogs outscored the Rams 20-6 in the final eight minutes.

Grimes’ message to his team this whole season is it needs to be playing its best basketball near the end of January. He saw a big step in the Rams’ play on Saturday.

“Considering the last two games we’ve played, today was a big step,” Grimes said. “Like I told them in the locker room, I’m never happy after a loss, but I’m happy with the improvement I saw from Thursday night to [Saturday]. We played a lot harder and gave ourselves a chance going into the fourth quarter.”

Valley travels to Russell County for its next area game on Tuesday.

LaFayette travels to Horseshoe Bend on Tuesday for a key area game.