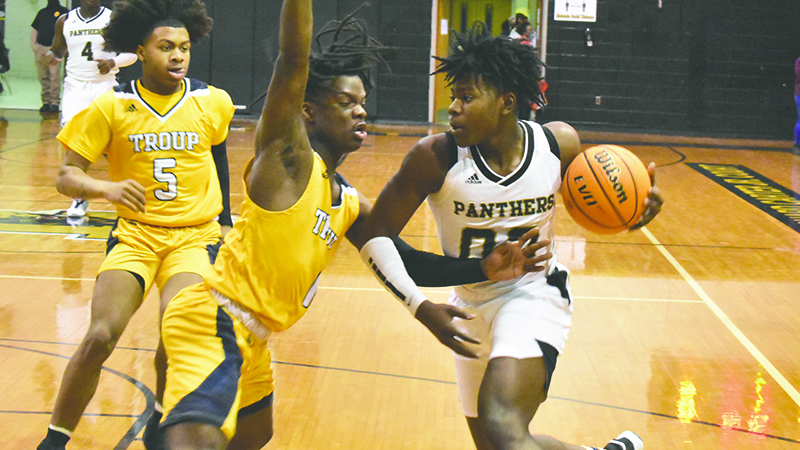 Lanett point guard Kintavious Dozier drives past a Troup defender. Dozier has finished with more than 25 points in all three of the Panthers games this year. They will play on LaFayette on Friday for their fourth game of the year.

One day after playing Troup in its third game of the season, the Lanett boys basketball team was forced to put its season on hold, as a positive COVID-19 test sent the Panthers into quarantine for two weeks.

Sunday was the first time the team was together and able to practice since losing to Troup.

“It’s hard because we quarantined for two weeks then I gave them a week off for Christmas,” Lanett head coach Trentavious McCants said. “Like kids do, they just sat around eating and playing video games. I’m trying to get them in here and back in basketball shape.”

While the quarantine stopped the Panthers from practicing, it gave the players time to rest and figure out how they want the season to go, which helped their intensity during the first week back.

“During the quarantine, everybody had a chance to sit down and think about how the season is going to go. The first part of the season started out kind of slow,” forward Trey Abner said. “Getting back in the lab, it really helped us a lot. We are coming back stronger and better.”

In the five days that they have been together, McCants’ primary concern has been getting his team in basketball shape. Most of the players were coming off football season in those first initial games, but they were getting into true basketball shape by the time they had to shut down.

This week McCants and his staff have been working on a lot of full-court fast break drills, hoping to get the team in shape as quickly as possible.

“It’s really like starting at ground zero,” McCants said. “They had those football legs, and we were trying to get them into basketball shape. Being off for three weeks, it’s the same thing. A lot of the drills that we do have been full-court drills and throw in some fun stuff. We’re really trying to have fun while we’re conditioning, so they will give it their all.”

This week’s practices were to touch on some offensive drills but mainly work on getting back in shape. Before shutting down, McCants wanted to see a lot of improvement in his team’s defense, which he thought had been subpar in its three games. Next week, McCants and his staff will be preaching defense.

“It’s hard to do defensive drills when you’re not conditioned, so that’s why we’ve been doing offensive stuff,” McCants said. “We’re going to focus on stopping people. At Lanett, we run and gun on offense, and we start extending our full-court defense. We haven’t been in shape, but hopefully against LaFayette, we’ll be able to extend our full-court and get after it on defense.”

The first time the Panthers will play in a game will be on Friday, when they host cross-town rival LaFayette.

The game is big for a couple of reasons. The first is it is the Panthers’ first game since Dec. 8. The second reason is it is an area game for the first time in two years.

The Panthers are 2-0 in the region because Randolph County forfeited both games against Lanett. The second of those two games was scheduled for Jan. 5.

While there is more on the line during Friday’s game than in the past two years, Friday is still a rivalry game for both teams. Last season, the Bulldogs swept Lanett, pulling away down the stretch in both games.

“No matter what LaFayette’s record is or no matter what they have going on their side, whenever they step up against Lanett, they bring their all,” McCants said. “That’s what I’m trying to get in my guys’ heads too. LaFayette is up next and they’re going to bring it, so we have to do the same thing.”