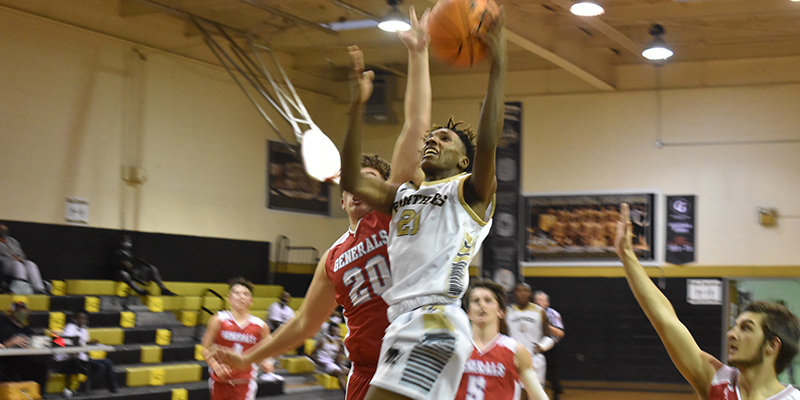 Coming out of quarantine, the Lanett boys basketball team was on a mission. Even though it had missed about a month of the season, it wanted to prove it was one of the favorites to win the 2A championship.

It started its 2021 schedule against area teams, handling them both easily. Lanett continued that trend on Monday, blowing out Horseshoe Bend 92-22.

“We like to keep people under 50, but that’s [less than] half of 50, so I think that’s pretty good,” head coach Trentavious McCants said. “We’re trying to get them to pick it up on the defensive end, start playing with a little more energy and a little more sense of urgency instead of waiting. I think we’re starting to become a first-half team and a full-game team instead of just waiting until the second half and getting after them on the defensive end.”

Lanett quickly built a double-digit lead in the first quarter. At the start, the Panthers weren’t getting many turnovers but were forcing stops inside. Coming off a stop, Lanett quickly pushed the ball up the floor and would barrel into the lane, usually finishing with a layup or drawing a foul.

In the first eight minutes of the game, Lanett outscored Horseshoe Bend 24-11. Of those 24 points, only four were scored outside the paint (a three and a foul shot).

The Panthers were even better in the second quarter, dropping 31 points on the Generals, who in turn scored just nine points.

The big reason for the team’s success was the defense, which is something that McCants has been preaching since the team’s first practice. The longer and more physical Panthers were able to tip or rip the ball away from the Generals ball handler on most possessions in the first half, which is a big step from earlier in the season.

“Being a second-half team, you never know what you’re going to get with some of the teams that we’re playing,” McCants said, “but I’m already talking about Calhoun (the 2019-20 2A state champions). I’m already talking about Midfield (currently the No. 1 team in 2A) and some of those teams in Birmingham that we’re going to have to play. Playing those types of teams, we’re going to have to play four quarters instead of just two.”

The Panthers were even better in the second half, outscoring the Generals 38-2. Most of the Panthers’ second-half points were scored at the free-throw line, as Lanett hit 15 of its 19 free-throw opportunities in the half.

After missing the last two games on a recruiting trip, senior Trey Abner led all scorers with 27 points.

“It was big to have him back because he brings us more depth at the big-man positions,” McCants said. “I think it was even bigger for some of our otter guys that don’t get that much playing time, like Al’yari Stephens and Makel [Patrick]. They have more playing time because he hasn’t been here. Now that we have Trey back, we’re a lot longer on the defensive end.”

With Abner missing the previous two games and two Panthers out on Monday, McCants has been forced to plug in players that were originally going to provide depth to some positions into the starting lineup. Even though the team has had to make some adjustments, it has been running through the last three teams it has played.

Lanett travels to Handley for its next game of the year. The Tigers are 9-6 on the season. Both teams have played Troup High School this year as the only common opponent. Lanett split with Troup, while Handley lost the pairs only matchup.