Lanett girls swept by Ranburne, fall to 2-2 in area play 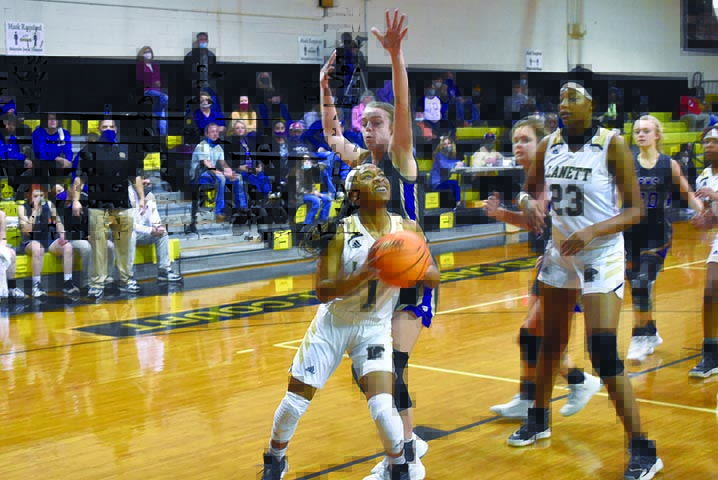 The Lanett girls basketball team dug itself a hole early in Friday’s area matchup against Ranburne. A strong second-half push brought the Panthers to within reach, but they ran out of time, losing 59-57.

Lanett struggled to find offensive consistency in the first half. It did a good job of getting into the lane but the shots usually wouldn’t fall or an extra pass would be deflected out of bounds.

Ranburne jumped ahead in the first quarter, scoring 19 of the 26 first-quarter points. Most of the Bulldogs’ possessions ended around the rim in the quarter, as they were able to score layups consistently in the quarter. When the defense shrank to defend against the drive, Briley Merrill made shots from the outside, hitting both of the Bulldogs’ made three-point shots.

In the second quarter, Lanett did a better job of slowing Ranburne down, as it limited the points in the paint to just four, but Ranburne continued to hit outside shots, knocking down three shots beyond the arc in the quarter. Lanett’s offense started to pick up as it scored 11 points in the quarter, but the consistency was still off.

In the second half, Lanett came out with a purpose. The Panthers continued to drive into the lane and put up layups. Though the shots still weren’t falling with ease, Lanett fought for offensive rebounds, usually scoring on second or third chance opportunities.

“They just decided to play harder. With girls, it’s like that sometimes, you don’t know what’s going on day-to-day with them,” head coach Charlie Williams said. “In the first half, they wanted to take it off, and I told them when we went into the locker room ‘if you don’t want to play, stay here in the locker room. If you go back onto the floor, you better show some energy.’”

With their energy picked up, Lanett started to get into a rhythm as the ball started to find its way through the net. The made shots slowly started to tack off some of the deficit.

Lanett really made its move late in the game. The Panthers, who trailed by 15 at the end of the third quarter, started to cut the lead down. The lead shrunk from 15 to nine with roughly two minutes left in the game. With less than a minute, the lead was down to two points. Lanett had a chance to tie the game with roughly nine seconds left but a turnover cost it a shot at the tie.

“[Merrill] is a really good ballplayer,” Williams said. “He [head coach Daniel Chambers] made some adjustments from the first time we played each other that we hadn’t seen. Once we got adjusted, it was fine. Samahria Davidson did a great job on [Merrill] in the second half, holding her to two points. After that, we were okay.”

Breanna Glaze finished the game with 24 points to lead all scorers. Of her 24 points, 17 were scored in the second half.

“Breanna is one of my hardest workers,” Williams said. “She plays with a feel for the game. She’s coming around to be a real solid ball player for me.”