Lanett holds balloon release for those who died in 2020 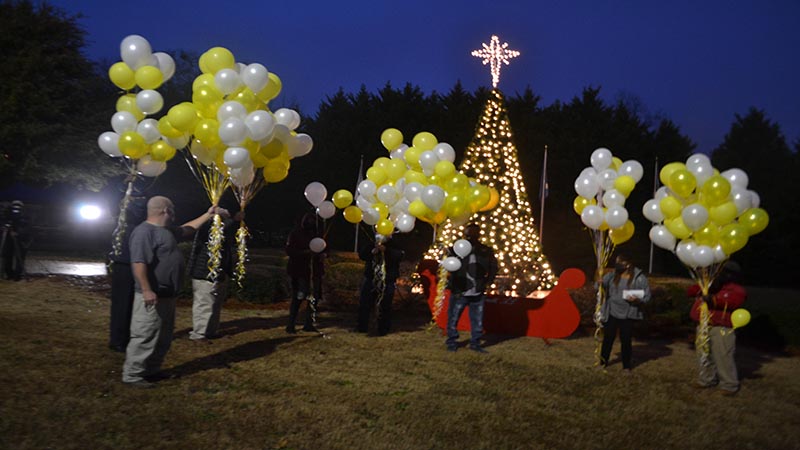 LANETT — A year of pain and suffering for many ended last Thursday on a cool and rainy evening.

To mark the final day of 2020, the City of Lanett held a 6 p.m. balloon release in Veterans Park.

Shannon Spraggins and his street department crew filled a total of 300 yellow and white balloons with helium and placed them underneath a big tent for city officials to release.

Mayor Kyle McCoy and members of the city council wrote on the balloons the names of Chambers County residents who had died during the year of COVID-19. They also wrote the names of local people who had been hospitalized with the virus and recovered. Other written names included some people who had died of reasons not related to COVID but who had a big impact on the local community.

“I want to thank everyone here for coming out on this rainy evening,” McCoy said. “This has been a difficult year for us all, and we should end it with a time of remembrance. We remember those we lost due to Covid-19. Chambers County has lost a total of 49 people this year due to COVID.”

The first local person to die of the virus was a Lanett resident who had lived a short distance away from Veterans Park.

Fortunately, the rain stopped just before 6 p.m., allowing the mayor and council members to stay dry as they released the balloons in the open area in front of the city Christmas tree.

There was still enough daylight to see the yellow and white balloons against the gray sky for up to a minute or more.

The mayor and council members decided to have such a ceremony at the final council meeting of the year.

“We wanted to remember those who had died of both COVID and other causes,” the mayor said. “Every life lost was special. We lost a former city manager, Bobby Williams; a long-time council member, Shirley Motley, and a long-time member of the Alabama House, Richard Laird. We thought it would be appropriate to end 2020 with a ceremony of remembrance.”

McCoy said he wanted to thank those who had brought photos and cards of remembrance to the city’s Christmas tree this year. “We took them to city hall and had them on display there,” he said. “We thought it would be better to do that than to leave these items out in the weather.”

The mayor said that while 2020 should end as a time of remembrance, we should all look forward to 2021 as a year of hope and renewal.

“It has to be better than what this year has been,” he said.