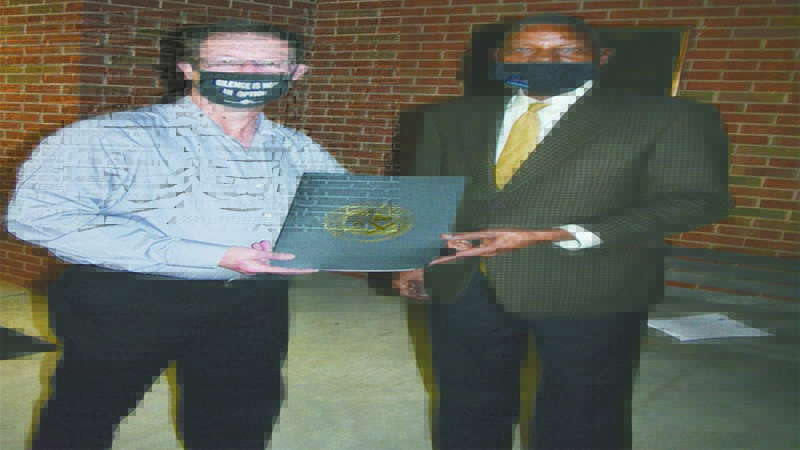 LANETT — The Lanett City Council has approved a proclamation recognizing January 2021 as Human Trafficking Awareness Month. At Monday’s council meeting, a copy of the proclamation was presented to Adrian Carpenter of the Chambers County Circle of Care Center for Families staff. Carpenter said that this is a much larger social problem than many people realize.

“We got into this about five years ago,” he said. “We were at a conference where human trafficking was a major topic. They told us that the average age of the person being trafficked was between 12 and 14 years of age. One of our major goals with the Circle of Care is preventing child abuse. They showed us a heat map where phone calls were being made that were related to human trafficking. There’s a lot of activity on I-85 between Atlanta and Montgomery. After seeing this, we knew we had to be involved in some way to prevent this.”

“For every one person who gets caught, there’s probably ten more that get away,” Carpenter said. “The FBI estimates that 5,000 people are trafficked in the state of Alabama every year.”

In the past five years, Carpenter and other members of the Circle staff have made lots of talks on the subject to local churches, civic groups and nursing students.

“We’ve talked to them about what to look for,” he said. “There are signs a trained person can see that a young person is being trafficked.”

The proclamation approved by the council noted that human trafficking takes many forms including debt bondage, forced marriage, slavery and commercial sexual exploitation.

“In every case, it goes against the core principles of individual freedom and civil rights that our state and nation stands for,” it reads.

“The U.S. State Department estimates that anywhere from 600,000 to 800,000 people are trafficked across international borders every year,” the proclamation continues.

“Most victims of human trafficking are women or children who have been marginalized and isolated from society. The difficulty in grasping the full scope of this problem can be further compounded because people often turn a blind eye to it.”

“We must work to ensure that all our residents are aware of this problem and how to spot it,” the proclamation reads. “We must work together as a community so that human traffickers are punished and to protect and assist their victims. Through the vigilance and perseverance of our citizens, effective enforcement of justice will someday be a reality, we ask all residents of this community to join us in raising the visibility of this crime whose victims are all too often invisible. Together, we can become more informed about this pressing issue and to work to combat injustices.”