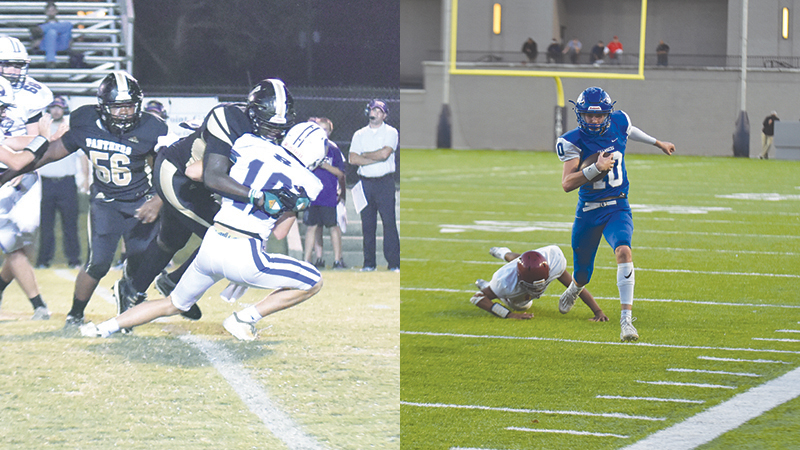 One week ago, the Alabama Sports Writers Association announced the finalists for Back and Linemen of the Year awards. Lanett’s Caden Story and Chambers Academy’s Payton Allen were each one of three finalists at their position in their classes.

On Wednesday, the ASWA announced that both Story and Allen were named Lineman and Back of the Year winners.

Allen had one of the best seasons in the state of Alabama. He threw for 3,209 yards, which was second in the state behind Thompson’s Connor Herrell. He was the only player in the state to finish with more than 4,000 yards.

“I’m blessed to be able to be nominated and win. I know that it’s an individual award but without the team and coaches, I wouldn’t have been able to do that,” Allen said. “I’m really excited.”

His yards led all AISA quarterbacks and his touchdowns were tied for first by a quarterback.

He beat out Landon Sims from Escambia Academy and Mayes White from Pike Liberal Arts for Back of the Year.

Even with the awards that he has won this year, to Allen, his senior year has been highlighted by winning the state championship.

“Winning the Back of the Year, it’s awesome and I really appreciate it, but there’s nothing like winning that championship with all your brothers,” Allen said. “Nothing can top that.”

Allen is the first Chambers Academy player to win the AISA Back of the Year since Malik Lyons won the award following the 2016 season. Allen was a backup on that 2016 team, playing behind Lyons.

Since ending his season, Allen was named the AISA East MVP and an ASWA first-team player. He currently has an offer from Faulkner to play football among some other schools in the southeast.

Story beat out Abbeville linebacker Rico Dozier and Spring Garden linebacker Luke Welsh, both of which were linebackers.

“It’s special,” Story said. “I didn’t really find out about it until my 10th-grade year when Kristian went. That’s when I was like ‘I want to be able to win one of these one day.’ Ever since then, I wanted to win that. It’s special.”

Story finished with 58 tackles, 18 tackles for a loss and 15 sacks as a defensive end. He also had 26 QB pressures.

Since ending his junior season, Story has been named a Tom Lemming All-American and an ASWA first-team player. Story currently has offers from Tennessee, Auburn, Indiana and Maryland.

“It’s been special. It’s been something that I’ve dreamt about since I was a little kid,” Story said. “I just want to keep getting better each and every day and help my team win.”

This is the first time that two players from Chambers County won a Back/Lineman of the Year Award. Last year, Lanett’s Kristian Story won both the 1A Back of the Year and Mr. Football award.

Both Allen and Story are finalists for the Mr. Football Award, which will be announced later in the month.

“It’s a great opportunity that I hopefully win, but if I don’t, I’m going to be happy for the next man, because I have another year to hopefully win it,” Story said.