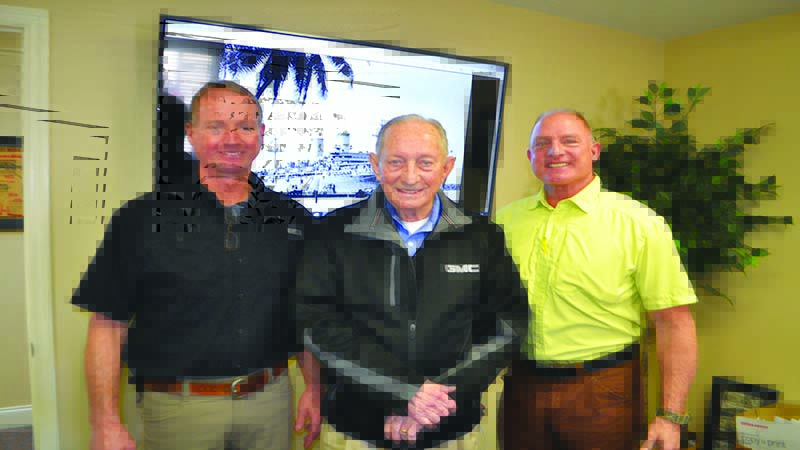 LANETT — Several years ago, Langley Motor Company owner Mac Langley received an award from General Motors on having been a Buick dealer for more than 50 years. It was a very rare and most prestigious recognition. Most automobile franchises don’t have a single owner to be in business for that long. On Thursday of this week, a General Motors official will be in town to present Mr. Langley another 50-year award, this one for having a long-lasting franchise for GMC trucks.

Anyone who racks up such accomplishments has a number of outstanding traits: they became a business owner at a young age, they have an extraordinary work ethic and the good judgment to surround themselves with the right kind of people. Having a good family support structure helps, too.

“I couldn’t have done this without the help of my two sons, Mitchell and Mark,” Langley said.

“He sells them, and I fix them,” Mitchell joked with his brother.

Langley has two more children. Daughter Alyson Matthews is an educator at W.O. Lance Elementary School in Lanett and son Phillip Langley is a U.S. postmaster in Roanoke.

Langley grew up on a Chambers County cattle farm at the end of the Great Depression and through the World War II era. He was doing farm chores at a very young age and drove a school bus to and from LaFayette High at age 16. He graduated from LHS in 1954. After high school, he attended the Nashville Auto & Diesel College in Nashville, Tennessee. This experience was eye opening for him. It taught him that there were all kinds of opportunities in the automotive field. Langley returned home to Chambers County and purchased a general store his grandfather, George Henry, had been running in the Ridge Grove community. Young Mac was quite an entrepreneur at that store. On the inside, he kept the general store moving along and on the outside started a side business fixing flat tires, changing oil and doing automotive repair. He also cut pulpwood on the side and became Chambers County’s first dealer for Poulan chainsaws.

He was doing quite well when he got his draft notice. This would be a life changing experience. He sold the store to his younger brother, Ben Langley, and the Poulan business to his older brother, Scott Langley.

Langley would spend several years in the U.S. Army, undergoing training at Fort Jackson in South Carolina and at Fort Leonard Wood in Missouri. He also spent some time at Fort Stewart in Georgia before going to South Korea for 13 months. He was there several years after the Korean War ended, and the place still looked like a war zone with rubble piles everywhere where buildings had once stood.

“Our compound was fenced in and guards patrolled the grounds all the time,” he said.  “I was fortunate not to have a lot of dirty work to do. They got me to look after the records.”

One of the more memorable experiences was they trip over and back on a troop ship. It took some 21 days, and anyone not used to the rocking back and forth of a ship on the high seas was in for it.

“You had to stand up to eat,” Langley said. “Your tray would go back and forth as the ship rocked.”

Like most of the troops being transported, Langley got used to it in a few days, but there was another problem when the ship ported in Hawaii, Wake Island and San Francisco.

“When you’d try to walk on dry land it was almost like the pavement was coming to hit you,” he said.

A sight Langley will never forget was the Golden Gate Bridge.

“I knew we were back home in the U.S.,” he said. “I was so happy to see something of our country. I was glad to see far away places like Korea, Japan and Hawaii, but I was so glad to be back on the mainland. When I got off the ship, I again felt like the pavement was coming up to hit me in the face. I knew I’d have to be reacclimated again.”

Langley came back to the U.S. aboard the S.S. General Mitchell. It was a troop transport that could hold up to 5,200 men. It served through the Korean and Vietnam War eras before being cut up and scrapped in the late 1980s for $1.2 million.

Following his military service, Langley wanted to get back home to Chambers County and get involved in the automotive business in some way. In 1959, he purchased the CV Tire and Recapping Business on North Lanier Avenue in Lanett. Little did he know at the time, but he would be along that section of street for many years to come. He called the new business Langley Tire Service. He sold Goodyear tires and offered recapping, front-end alignments, balancing and brake service. That building is no longer there today. Right next door, though, was Bartlett Oldsmobile, a business that had been owned by George and Homer Bartlett since 1946. They sold the business to Langley in 1965.

Inside the Langley Motor Company’s conference room is a large framed black and white photo of that building and the first shipment of new cars to be sold there. The Oldsmobiles were a carryover from the Bartletts, but Langley had acquired franchises for Buick and Opel vehicles. The photo shows new Oldsmobiles, Buicks and Opels waiting for customers to check out.

Manufactured in Germany, Opels were phased out in the U.S. when General Motors stopped having them shipped here.

Langley dropped Opels but got something bigger and better a few years later when Pontiac was added to their line. Pontiacs were sold by Langley from 1982 through 2010, when they were phased out following a sharp downturn in the U.S. economy.

“Oldsmobiles were our dominant brand through the 1980s,” Mark Langley said. “Since the 1990s, Buicks and GMC trucks have been our top sellers.”

One thing Langley is very proud of is that all four of his children have college degrees. Mitchell was the first to graduate, earning a degree from Auburn; Mark soon followed.

The current showroom and office area for Langley Motor Company was acquired in 1982. It had previously been Birdsey’s Feed & Seed. The building underwent a transformation with the new showroom opening in 1983.

The business has had its problems with weather-related issues over the years. The tire business was hard hit by the 1961 flood.

“Pop Ennis carried me in a boat to my business in the 1961 flood,” Langley said. “After the high water went down, we had a big cleanup to get back to normal.”

Mitchell and Mark won’t forget the flood of May 2003.

There’s an old saying that you can take the boy out of the country, but you can’t take the country out of the boy. It’s like that with Mac Langley. He grew up on a cattle farm and still likes to tend beef cattle in places he has in rural Chambers County. It is different now from the way it was when he was a boy. At that time, the farm chores were the first thing taken care of in the morning. Now, Langley Motor Company comes first and cattle farming is for late in the day.