Langley recognized by GM for five decades of business 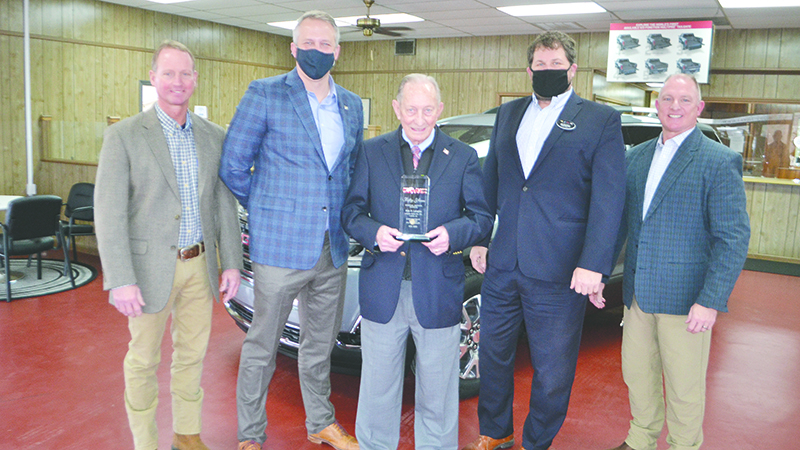 Mac Langley (at center) has received an award from GM officials on having been a dealer for GMC Trucks for more than 50 years. The award was presented in the Langley Motor Company showroom Thursday morning. Josh Weimer, zone manager for GM’s regional headquarters in Atlanta, and Quintin Siemer of Birmingham, the district manager, made the presentation. From left, are Mitchell Langley, Weimer, Mr. Langley, Siemer and Mark Langley.

LANETT — Langley Motor Company owner Mac Langley received a highly prestigious award on Thursday. General Motors’ zone manager, Josh Weimer of Atlanta and the company’s district manager, Quintin Siemer of Birmingham, came to the dealership to present Mr. Langley an award recognizing the very rare achievement of having had a franchise for GMC  Trucks for more than 50 years. He’s previously received an award on having been a Buick dealer for more than 50 years.

“Local dealerships are the backbone of our organization,” Weimer said. “It’s an amazing achievement for any dealer to be in the business for 50 years. This is a big deal. Mr. Langley and his two sons have served the two-state area very well for a long time. We are privileged to present an award to a GM dealer who has done great work for the company over a half-century.”

“It’s very unusual for a stand-alone dealership to remain in the same location and under the same ownership for 50 years,” Siemer said. “It’s an honor for us to be here today and present an award that is so richly deserved.”

The General Motors Company (GM) is an American multinational corporation headquartered in Detroit, Michigan. GM designs, manufactures, markets and distributes vehicles and vehicle parts. The company was founded as a holding company by William C. Durant on September Sept. 10, 1908. The current entity was restructured in 2009. GM is the largest automobile manufacturer in the U.S. and one of the largest in the world. The current top five includes Volkswagen, GM, Toyota, Hyundai-Kia and Ford.

Mac Langley has been in business on North Lanier Avenue in Lanett since 1959. He started out as a dealer for Goodyear tires. In 1965, he purchased the Bartlett Oldsmobile dealership next door to his tire business, and has been a dealer with GM vehicles ever since. He had franchises for Oldsmobile and Buick in 1966 and was also a dealer for Opel vehicles, which were made in Germany. Opel and Oldsmobile were phased out along the way, but Langley has remained with Buick since the start. He added GMC trucks in 1969 and has been a dealer for them since that time. Langley Motor Company sold Pontiacs from 1982 until they were discontinued in 201o.  Mr. Langley credits his two sons, Mitchell and Mark, for playing big parts in the company’s continuing success.

“I wouldn’t be here today without them,” he said.

Mark is pleased the dealership received an award from GMC Trucks.

“They are our biggest seller,” he said. “People like our Buicks, too, and that’s okay.”

Mitchell is happy for his dad to still be active in the business.

“He’s going to outlive us all,” he said.

Siemer said the award should have been presented months ago but that COVID-19 has caused lots of delays for a big company like GM.

Langley grew up on a Chambers County cattle farm at the end of the Great Depression and through the World War II era. He was doing farm chores at a very young age and drove a school bus to and from LaFayette High at age 16. He graduated from LHS in 1954.

After high school, he attended the Nashville Auto & Diesel College in Nashville, Tennessee. This experience was eye-opening for him. It taught him that there were all kinds of opportunities in the automotive field. Langley returned home to Chambers County and purchased a general store his grandfather, George Henry, had been running in the Ridge Grove community. Young Mac was quite an entrepreneur at that store. On the inside, he kept the general store moving along and on the outside started a side business fixing flat tires, changing oil and doing automotive repair. He also cut pulpwood on the side and became Chambers County’s first dealer for Poulan chainsaws.

He was doing quite well when he got his draft notice, which would be a life-changing experience. He sold the store to his younger brother, Ben Langley, and the Poulan business to his older brother, Scott Langley. Langley would spend several years in the U.S. Army, undergoing training at Fort Jackson in South Carolina and at Fort Leonard Wood in Missouri. He also spent some time at Fort Stewart in Georgia before going to South Korea for 13 months. He was there several years after the Korean War ended, and the place still looked like a war zone with rubble piles everywhere where buildings had once stood.

“Our compound was fenced in and guards patrolled the grounds all the time,” he said.  “I was fortunate not to have a lot of dirty work to do. They got me to look after the records.”

One of the more memorable experiences was the trip over and back on a troopship. It took 21 days, and anyone not used to the rocking back and forth of a ship on the high seas was in for it.

“You had to stand up to eat,” Langley said. “Your tray would go back and forth as the ship rocked.”

Like most of the troops being transported, Langley got used to it in a few days, but there was another problem when the ship ported in Hawaii, Wake Island and San Francisco.

“When you’d try to walk on dry land, it was almost like the pavement was coming to hit you,” he said.

A sight Langley will never forget was the Golden Gate Bridge.

“I knew we were back home in the U.S.,” he said. “I was so happy to see something of our country. I was glad to see far-away places like Korea, Japan and Hawaii, but I was so glad to be back on the mainland. When I got off the ship, I again felt like the pavement was coming up to hit me in the face.”

Langley came back to the U.S. aboard the S.S. General Mitchell. It was a troop transport that could hold up to 5,200 men. It served through the Korean and Vietnam War eras before being cut up and scrapped in the late 1980s for $1.2 million.

Following his military service, Langley wanted to get back home to Chambers County and get involved in the automotive business in some way. In 1959, he purchased the CV Tire and Recapping Business on North Lanier Avenue in Lanett. Little did he know at the time, but he would be along that section of street for many years to come. He called the new business Langley Tire Service. He sold Goodyear tires and offered recapping, front-end alignments, balancing and brake service. That building is no longer there today. Right next door, though, was Bartlett Oldsmobile, a business that had been owned by George and Homer Bartlett since 1946. They sold the business to Langley in 1965.

Inside the Langley Motor Company’s conference room is a large-framed black and white photo of that building and the first shipment of new cars to be sold there. The Oldsmobiles were a carryover from the Bartletts, but Langley had acquired franchises for Buick and Opel vehicles. The photo shows new Oldsmobiles, Buicks and Opels waiting for customers to check out.

Manufactured in Germany, Opels were phased out in the U.S. when General Motors stopped having them shipped here.

Langley dropped Opels but got something bigger and better a few years later when Pontiac was added to their line.

Pontiacs were sold by Langley from 1982 through 2010, when they were phased out following a downturn in the U.S. economy.

“Oldsmobiles were our dominant brand through the 1980s,” Mark Langley said. “Since the 1990s, Buicks and GMC trucks have been our top sellers.”