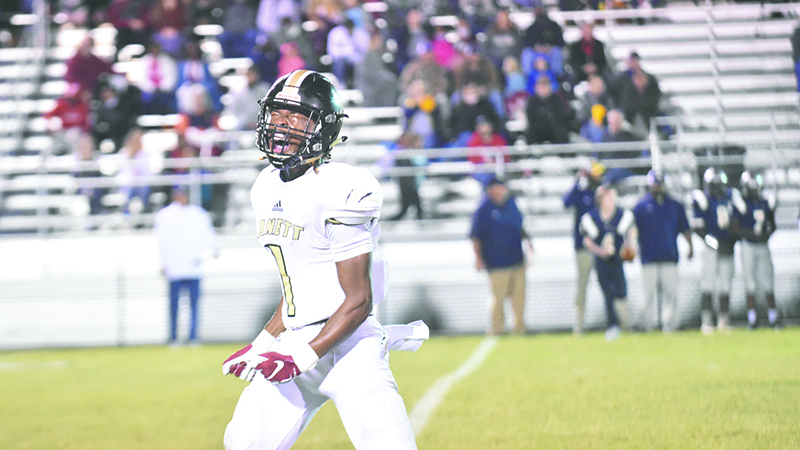 Lanett senior Seidrion Langston celebrates after a big play. He will suit up for Independence Community College at the next level. --File Photo

The second senior Lanett Panther has picked where he will continue his football career, as Seidrion Langston has committed to play for Independence Community College in Independence, Kansas.

“I really feel like it’s the best route for what I want to do in the future,” Langston said. “My granddaddy always told me when I made the decision, think about it would be good for me in the future, not just the present. It felt like home and the relationship I had with the coaches just all came together to help me make my decision. I had thought about it for a while and prayed about it. It’s the door that God led me to.”

A big reason Langston made his decision was because of the belief that the coaches showed in his play and the way they talked to him through the recruiting process.

“They told me that I passed the eye test, and they were the only school to tell me that. That stood out to me,” Langston said. “They were telling me about the guys that they’ve sent places, especially [the players that are comparable to] my size and my athletic ability. A lot of coaches when they talk to you, they make it sound good, but they were looking at me in my eyes when they were talking to me. It just felt like the right decision.”

Langston was a standout on the 2020 Panthers team.On offense, he was second on the team in catches, receiving yards and touchdowns, finishing with 32 receptions, 491 yards and seven touchdowns.

But Langston dominated on defense. In his senior year, Langston was a hybrid type of player, moving between outside linebacker and safety depending on the coverage. Overall, he finished the season with 81 total tackles (59 solo and 22 assists), six forced fumbles, three fumble recoveries, six pass breakups and three interceptions. His defensive play earned him an honorable mention on the Alabama Sports Writers Association All-State team.

While at Independence, Langston will continue to play his hybrid role.

“I really wanted to go to school to play receiver at the beginning of the summer, but as the season went on, I felt that I was really good at defense,” Langston said. “That’s when I fell in love with it, being a facilitator on defense, making sure everyone is in the right spots, helping them out and doing my job of being all over the place. I think that’s what I like about it the most, just being all over the place.”

Independence is one of the top community colleges in the country for football. The team was featured on Netflix’s “Last Chance U,” and won a Kansas Jayhawk Conference championship in 2019.

Since 2018, Independence has sent more than 30 players to different schools around the country, including schools like Georgia, Boise State, Arkansas, Tennessee and Washington State.

“It was kind of big. I was talking to Joko Willis [a player from Troup High School that went on to play for Independence and is currently committed to play for Kentucky next season], he was just saying ‘this is the last chance to make it somewhere. It’s another chance to go D1 after high school. You just have to do what you have to do, stay on your school work and everything will come to you,’” Langston said.

Langston is the third player from Chambers County to announce his commitment to play football at the next level. His teammate Kelvin Zachery chose to play at Faulkner, while Valley’s Tino Linson will play safety at Wisconsin Lutheran College.

“I want to thank coach [Clifford] Story and coach [Earnest] Webb because they are the reason I played football from the jump,” Langston said. “I want to thank coach Charlie [Williams] for molding me into the defensive player that I am. Those three played a big part in my football career because I did not plan on playing football when I moved here, and I ended up falling in love.”