McQueen looks for assistance with training 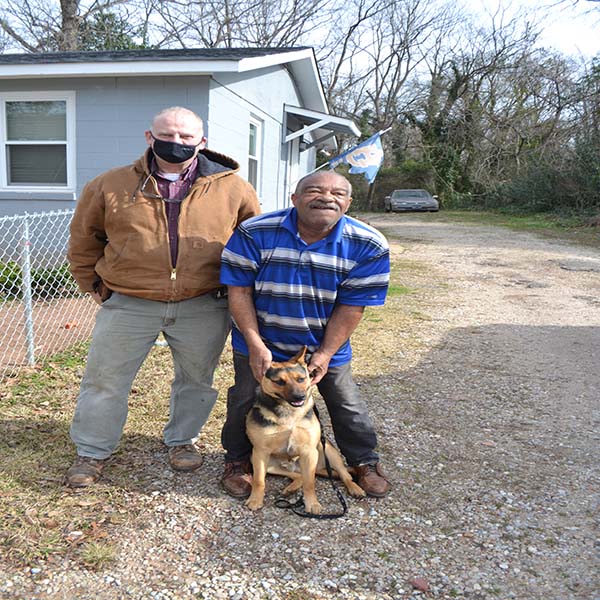 WEST POINT — Willie McQueen loves his 10-month-old German Shepherd. The dog is from a litter of seven puppies that were born on March 4th.

“That’s my birthday,” McQueen said. “That makes it really special to me. I named him Wes because that was my dad’s name, and I can keep that name alive every time I call him. Every time I call him Wes I think of my dad, and my Uncle Chester (Ausby), who named my dad Wes. They will always be in my heart. I love this dog so much. He’s so full of energy.”

There’s a problem with Wes being so full of energy. McQueen lives alone and is vision impaired. An aneurism some 11 years ago now cost him his eyesight in his left eye and greatly limited his vision in his right eye.

Wes would be a handful for almost any owner right now, but it’s especially true for McQueen, who’s 62 and on disability.

He’s been taking dog obedience lessons from Susan Ray of Hero Training K9 in Franklin, Georgia. Ray drives down from Franklin to work with Wes at McQueen’s home across from Keeney Memorial United Methodist Church. Ray is an expert in obedience training, but the lessons are expensive. Donations are needed to complete the lessons and for Wes to be a better companion.

There’s a fenced-in front yard at McQueen’s home. It offers plenty of room for Wes to run around and work off that bundle of energy he has. He can be a little on the rambunctious side when he’s inside.

“I want my dog trained,” McQueen said. “I would appreciate any help I can get with this.”

One of McQueen’s nurses, Shanna Harris, owns the German Shepherd that had the litter of puppies including Wes. “She asked me if I wanted one of them,” McQueen said. “When she told me the puppies were born on March 4th, I knew I had to have one of them and to call him Wes. I love him so much, but he does need to be trained. He’s just like that big dog in the cartoon. The only way I can get him to calm down is to give him a Scooby snack.”

McQueen is reformed from a life that was being wasted on drugs.

“There was a time when all I ever thought about was how to get them and to stay high,” he said. “It was such a waste, and I am so fortunate I was able to get my life turned around.”

The transformation started on a Thursday night when he attended a Celebrate Recovery session at the Refuge Point Church.

“They invited me to attend church on Sunday,” he said. “I went, liked the service and have been going there ever since.”

That was when the church was located behind the West Point Post Office. It has since relocated to the former Church of the Resurrection building, located in West Point’s Harris County section.

“With my limited vision, I have had to re-learn how to do everything,” McQueen said. “I am lucky to have friends and family members who come by to check on me. I’m thankful people drive me to and from church. I am grateful to be able to see at all. I could very easily be totally blind.”

McQueen has a guiding principle.

“There are two kinds of problems,” he said. “There are problems you can solve, and those you can’t. You have to work on the problems you can do something about and pray to God to help you with those you can’t solve. I try to be happy. People tell me they like it that I am always smiling and laughing about something. I can control how I treat anyone, but I can’t control how they treat me. If I am happy around them, maybe they will be happy, too.”

McQueen is good with comebacks that make people laugh. When someone tells him “We’ll see ya, Willie” upon leaving, he tells them “I wish I could say that to you.”

The house McQueen is living in is a Chattahoochee Fuller Center Project (CFCP) home that was built in 2019. The CFCP provided the materials and volunteers from Refuge Point Church provided the volunteer labor. Some college students from Ohio spent their spring break working on the house.

“I really like living here,” McQueen said. “There’s no way I can thank all those people for what they did. Mayor Steve Tramell even brought a trackhoe over here to do some work that was needed on the outside. How many mayors are there that will do something like that to help someone? He’s a great guy and a friend for life.”