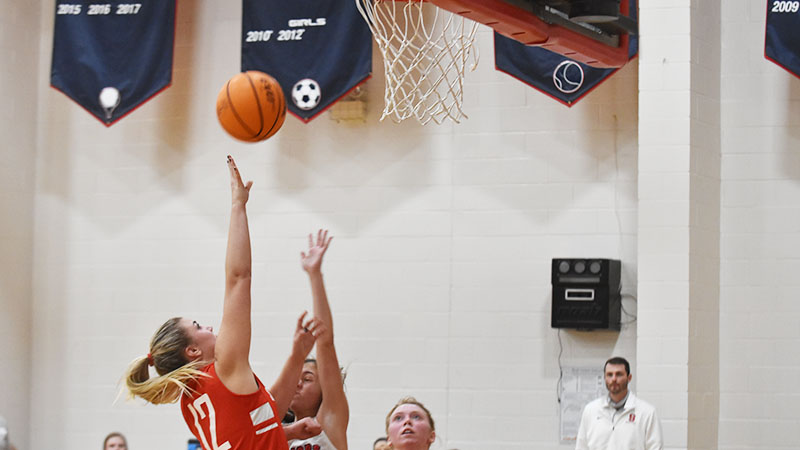 The offensive struggles continued for the Springwood girls basketball team on Thursday night, as it scored just 13 points in the first half of its 55-19 loss to area opponent Lee-Scott. The loss drops the team’s record to 2-5 and 0-2 in area play.

“We have to go back to the basics, squaring up with your back to the basket when you catch the ball,” head coach Lisa Sampson said. “We’ve got to find some go-to scorers. No one looks like they want to score the ball. We’ll get better. We’ll just continue to work.”

Springwood was in the game early.  About three minutes into the game, Springwood only trailed by four points. Its offense was struggling to break the full-court press that Lee-Scott implemented, but its defense was getting stops. Most of the turnovers in the first couple of minutes were dead-ball turnovers, which allowed the Wildcats to set up their defense.

Senior Lucy Spivey scored the first two points of the quarter for the Wildcats, knocking down a pair of free throws. Unfortunately for Springwood, Lee-Scott started knocking down shots, scoring five points in less than 30 seconds.

The press started forcing live-ball turnovers, which were usually converted into points for the Warriors.

Defensively, Springwood did a good job rotating in the halfcourt set, but at the end of the first quarter, it trailed by 10.

“We were moving when the ball is in the air, so we were getting into position. Everyone was working together and being where they were supposed to be,” Sampson said.

Springwood continued to struggle against the full-court press in the second.

“We didn’t do a great job with our press breaker,”  Sampson said. “We’ve been working on it, but we just don’t have an understanding yet of not dribbling but passing against a press. We will just continue to work, that’s all we can do.”

When they weren’t scoring off turnovers, the Warriors used their size to get second or third chance opportunities.

“We didn’t rebound well. We got beat on the inside pretty good,” Sampson said. “We have to figure out how to side guard and not make that inside pass so easy-going inside.”

Lee-Scott doubled its first-quarter score by halftime and led by 22 at the half. Lee-Scott stayed in its full-court pressure the entire game, which led to more easy scoring opportunities.

By the start of the fourth quarter, Springwood trailed by more than 30, which allowed the clock to run the duration of the quarter.

Sophomore Anna Smith led the Wildcats in scoring with nine points off the bench. Every other Wildcat that scored finished with two points apiece.