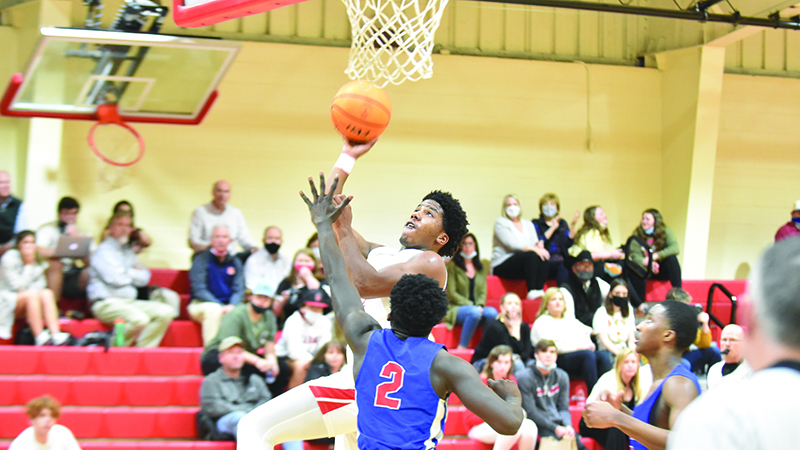 Coming out of halftime, the Springwood boys basketball team trailed Macon East by eight points. It had shown flashes on offense but was still trying to play with more consistency, while it was struggling to stop Macon East on defense. The Wildcats dominated the third quarter, leading to a 59-53 win.

“This was huge for us,” Sampson said. “From a coaching standpoint, we really have underachieved. We haven’t shot the ball well, we haven’t executed well offensively or defensively. That’s a testament to the team’s that we’ve played too, but we haven’t been us. Today we were us. That started with Tyrese being ready to play and knocking down some shots. We’re ready. Our mindset was we needed to rotate more kids in because we have to have the numbers to get where we want to get in the playoffs.”

Macon East jumped on Springwood from the start. The Knights were dominating the perimeter, hitting several contested or wide-open jump shots. Of their 14 points, eight were scored either behind the arc or with a deep mid-ranged jump shot. The Knights stayed equally as hot in the second quarter, scoring 15 points in the quarter. Outside of a couple of jump shots, Macon East was forcing turnovers and winning the battle inside, either out muscling or using its height to score baskets in the paint.

“We had made an adjustment defensively for them because when we played them the first time, they were a very good 3-point shooting team, and we thought this was the answer,” Springwood head coach Lisa Sampson said. “In the first half, we just didn’t play it well. In the second half, we bought into playing the rules, contesting every shot and they had to start missing because man, they were hot. We just kept telling them ‘do what you’re doing, contest the shots and rebound hard.’”

At halftime, Springwood trailed by eight, but it played arguably one of its best quarters of 2021 in the third.

Offensively, Springwood barely missed a shot. The eight-point deficit quickly turned into a lead three-point lead, which grew to 10 by the end of the quarter. Springwood drilled four 3-point shots, as Crabb and sophomore Eli Westbrook found their stroke, and Cameron and Ferguson were able to get the ball inside and score with ease around the basket.

Along with scoring six points in the quarter, Cameron was a big facilitator of the offense and played great defense along the perimeter in the Wildcats’ 3-2 zone.

“He actually got a pretty good gash in the side of his head and they stitched him up,” Sampson said. “That just talks about his toughness. He wanted to go back in. Not having him for a lot of that first half was tough, but he came back ready to go.”

Macon East cut the lead to two points with less than two minutes left in the game. The Knights were scoring off rebounds and forced a few turnovers, which they converted into easy points.

Springwood held the ball for the most final two minutes, but Macon East had a chance to tie the game.

With 50 seconds left, the Knights tried to drive in for a basket, but senior Will Craft stepped, drawing a charge and giving Springwood the ball. On the ensuing inbounds play, Ferguson launched a pass down the court where Craft managed to snag the ball right before landing out of bounds. He hit Cameron for a wide-open layup for the game’s final points.

“Will does all the little things and he’s about as tough as nails,” Sampson said. “He’s a big part of the reason of our success, and it doesn’t always show up in the stat sheet. He’s a kid with great vision and passing ability.”

Springwood’s seniors stepped up big in their final game at home. Of the 59 points, 48 were scored by a senior. Crabb led all scorers with 18 points, while Ferguson scored 17. Craft finished with four while Cameron finished with nine.

“For me to have my second year with Tyrese and Will, it’s so fun to watch them grow as players and as men. I feel very blessed to be apart of their basketball careers, and it is just getting started,” Sampson said. “My guys from Auburn High [Cameron and Crabb], I’ve known for years. They lacked confidence at Auburn High and they made a decision to come here. That’s all they needed was confidence. They’re both players. They both work really hard in the offseason, and you can see the result. I’m so happy for them. They’re great kids and they deserve this.”

Springwood will travel to Chambers Academy before entering the playoffs. The Wildcats must travel to Success Unlimited Academy in the first round.