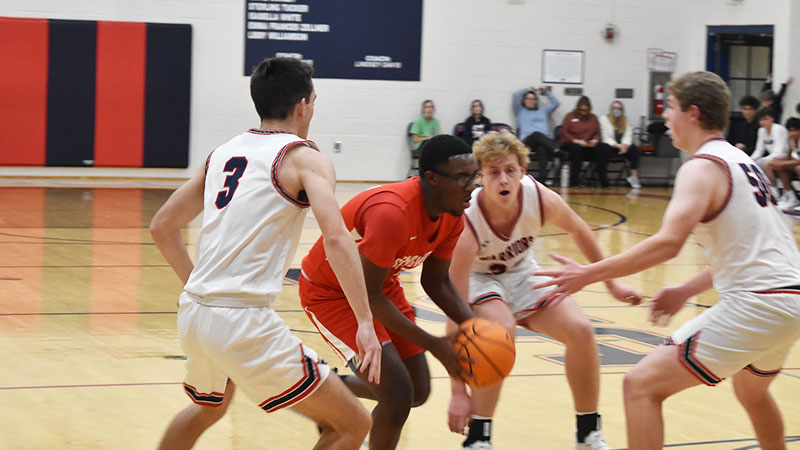 Early in the game, it looked like the Springwood boys basketball team would be able to pull away from Lee-Scott. It was playing good defense and getting good looks, but the shots just weren’t falling.

In the second half, Lee-Scott started getting to the rim with ease, resulting in a 62-50 loss for Springwood.

“We didn’t execute what we were asking them to execute,” head coach Lisa Sampson said. “We got up 17-4 to start the game, and you lose your mojo. You stop doing what you were doing and what was working. It was ugly. We better learn from this one.”

The loss is the Wildcats’ third of the year but second in the area, dropping their area record to just 1-2 halfway through the area schedule.

Both teams struggled to shoot to start the game, as points were scarce in the opening minutes of the game. Springwood, which normally forces a lot of turnovers around the half-court line, was failing to get steals, but its defense was doing a good job of keeping the Warriors off-balance. While it wasn’t scoring in its normal fashion, Springwood was able to get around the rim a lot, but shots just weren’t falling. At the end of the first quarter, Springwood led by five.

To start the second, Springwood started making its shots, getting up 13 at one point in the quarter. Unlike in most of its games this year, Springwood started to get out of position defensively and started committing fouls. The fouls slowed the Wildcats’ momentum, which allowed Lee-Scott to creep back into the game.

At halftime, Springwood’s 14-point lead had shrunk to just two.

In the second half, Lee-Scott changed its defensive look. The Warriors changed into a 1-3-1 zone (one player up top, while one player is under the basket. The other three players are in the middle of the arc.) Springwood’s offense stalled at the defensive shift. The normally up-tempo Wildcats were forced to hold the ball and pass the ball around the perimeter, looking for an open shot. This forced some turnovers and tough shots.

“We just weren’t doing anything quick enough,” Sampson said. “We were holding the ball and overdribbling. Against a zone, that’s what they want you to do. We made it very easy on the defense, not taking anything away from Lee-Scott because their defense was good. But, we did not do what we had planned to do.”

The lead changed hands several times in the third quarter, as both teams went up as much as four-points, but Springwood ended the eight-minute quarter with a one-point lead.

In the fourth, Springwood’s defense struggled. Lee-Scott was able to get to the rim with ease, making just one or two easy passes after a drive to the rim.

“We contained Carson Alexander in the first half (five points), but the second half, I guess we forgot the was on the floor and to play him (15 second-half points),” Sampson said. “Not rotating on defense, and guards going in for layups. It doesn’t get much easier than that. We have to adjust.”

Lee-Scott outscored Springwood 28-15 in the quarter, scoring 16 points in the final 4:46 of the game.

Seniors Tyrese Ferguson and DQ Cameron were the Wildcats’ leading scorers, finishing with 16 and 10 respectively.

Springwood will travel to Birmingham for its next game, as it takes on the Banks Jets.