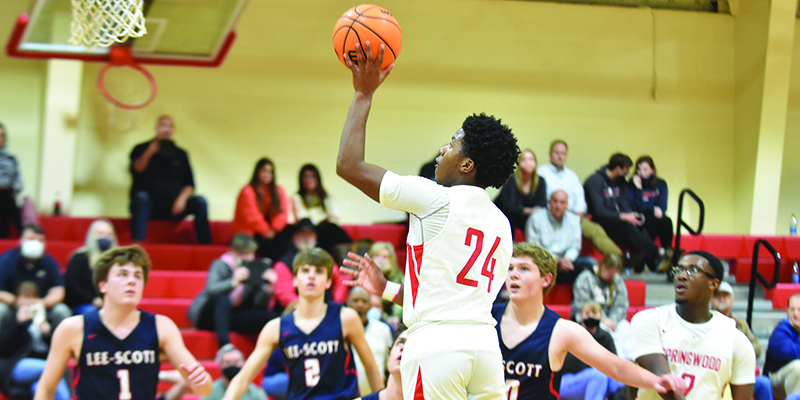 On Thursday, the Springwood boys basketball team faded down the stretch at Lee-Scott, losing by double digits. The team struggled to find consistency on offense for most of the second half in that game. That struggle continued for the Wildcats on Tuesday, as they were swept by Lee-Scott 56-47.

In the first half, Springwood was playing its signature defense. It was forcing turnovers and was quickly getting to the rim and free-throw line. The only problem was the shots weren’t falling. In the first four minutes of the game, Springwood had managed to score just one point. The layups weren’t dropping, even after second or third chance opportunities.

“When the shots don’t fall, that’s it,” head coach Lisa Sampson said. “Defensively, we were doing alright. It was kind of like everything that could have happened, happened. From dribbling it off our foot to passing it to the other team, it’s just tough. We have to figure out how to play team basketball when it gets tough like that. Don’t try to do it all yourself, but the biggest thing is just knocking down your shots.”

Though they finished with 10 points in the first quarter, Springwood struggled to find very much consistency. However, its defense kept it in the game. Lee-Scott hit a pair of three-point shots, but for the most part, it was struggling to get open looks. The press was forcing turnovers and in the half-court set, Springwood was moving well around the floor. Lee-Scott also was trying to find a rhythm from the free-throw line in the quarter, as it shot just 2-of-6 from the line in the first quarter.

“You just have to be positive with them. I know what they can do, and that’s so frustrating because they’re not showing everyone in the stands what they can do,” Sampson said. “We’re a good bunch of kids. They’ve just got to learn when there’s jawing going on, just stay within your game.”

The shooting troubles continued for Springwood in the second quarter, scoring just seven points in the quarter. For most of the quarter, the Wildcats were on defense, since they were struggling to get turnovers and stop the Generals in the half-court set.

Along with not forcing turnovers and struggling against Alexander, Springwood started to get into foul trouble, as two of its starters had to sit for most of the quarter because of early foul trouble.

At halftime, Springwood trailed by 10 points, which was about the deficit for most of the second half. Springwood mounted a small comeback in the latter part of the fourth quarter, knocking the deficit to single digits, but there was too little time left on the clock and Lee-Scott was hitting its free throws.

“I think it all just comes down to free throws,” Sampson said. “They made their free throws. I think we missed the first seven we shot there in the first quarter.”

Springwood missed nine of its 16 free-throw attempts, while Lee-Scott hit 20 of its 33 attempts.

With the loss, Springwood is now 1-3 in the area and will try and lock up that third region spot on Thursday against Southern Preparatory Academy.

“You just have to take it game by game. We just talk about being and getting better,” Sampson said. “That’s our focus tomorrow is getting ready for Southern. I can tell you that we’re going to shoot the ball a lot [on Wednesday].”