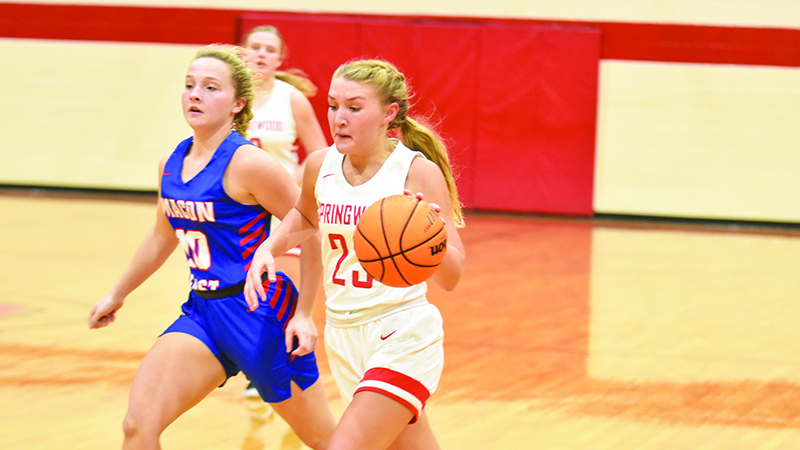 Points were tough to come by for both the Springwood girls basketball team and Macon East early in Tuesday night’s game, but a Macon East second-half surge led to a 36-25 Springwood defeat in its final home game of the season.

Neither team found much success on offense in the first quarter. Springwood found space along the perimeter, but it couldn’t knock down a shot. When they got inside the paint, the Wildcats couldn’t convert, usually having a shot clang off the rim or hitting nothing at all. While their offense stagnated, the Wildcats were forcing tough shots and corralling rebounds.

The two teams combined for just four points, all of which were Macon East free-throw makes, in the first 7:05 of the game. Springwood hit its first shot with 55 seconds left in the quarter, but Macon East followed up with a 3-point make to give it a 7-2 lead heading into the second quarter.

“I think I put a little too much importance on senior night. We have five phenomenal seniors so I think we were just a little bit tight,” Springwood coach Michael Jenkins said. “Struggling to score, when you don’t hit a shot or two, makes the rim seem a lot smaller than it really is. When a couple of buckets go in, it looks 10 feet wide. We missed some gimmes early and it really just broke our confidence.”

“The best way to create turnovers is to force turnovers and get easy buckets,” Jenkins said. “We started pressing a little bit. Anna Smith came in and started giving us some turnovers. Once you see the ball go in the rim, it makes it a little bit easier.”

The two teams were tied at 14 at the half, but Springwood came out of the half slow once again, while Macon East came out hot. The Knights scored eight of the 12 points in the quarter, hitting shots in close, while Springwood fell into the same problem it had in the first quarter.

Springwood scored 11 points in the second half, most of which were scored in the latter part of the fourth quarter.

“The last five games, we’ve been close at halftime, and we come out flat,” Jenkins said. “I told them that we can’t settle for a good 16 minutes, we have to play a good 32. We have to realize that a half isn’t good enough and that is going to be our goal at Chambers on Thursday and moving into the playoffs.

The Wildcats celebrated their senior night, paying respect to all winter-sport athletes. The girls’ team has five seniors, all of which had to step up and learn how to lead a young Wildcats team.

“I could write a book about these girls. The five of them are awesome,” Jenkins said. “I always tell them, ‘I don’t care if they make another shot, I want you to be a good person.’ They’re leaders in the community, leaders in the school, all have phenomenal GPAs. They’re just great people. They work their butts off and I’m going to miss them. I’m not an emotional guy, but I got kind of teary-eyed in the lockerroom. I’m thankful for their effort and all they have given to this program and myself.”

Springwood will travel to Chambers Academy to wrap up its regular season. Springwood will have a first-round bye in the playoffs before facing Tuscaloosa Academy.

“We really want to finish our season on a high note. We have our biggest rival and we’re excited to play them and have some momentum heading into the playoffs,” Jenkins said. “We get the opportunity to play in the Crampton Bowl. It’s a good opportunity for our girls.”