Springwood girls falter in second half vs Lee-Scott 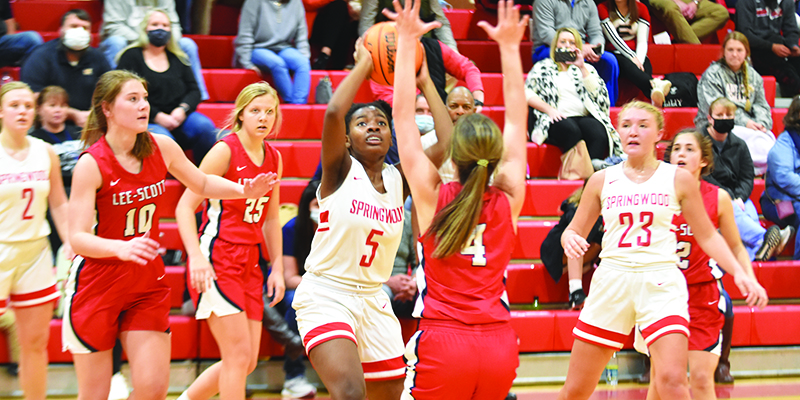 When Springwood traveled to Lee-Scott less than a week ago, it struggled to break the Warriors press, especially in the first quarter. On Tuesday,  the Wildcats handled the press a lot better, but a second-half surge from Lee-Scott left Springwood struggling to find an answer for the final 16 minutes of play. Lee-Scott pulled away midway through the third quarter before winning 56-33.

“They worked really hard on the press break between now and the last time we played them,” head coach Lisa Sampson said. “I’m super proud of the way they played. In the first half, they probably played the best half they’ve played all season, but basketball us a game of two halves. We’ve got to figure out a way… we were executed in the second half,  we just couldn’t finish. Just mental mistakes, from a travel to losing the ball. We’re getting better and that’s what is fun to watch.”

In the first quarter of Thursday’s loss, Springwood struggled to move the ball, at times having multiple possessions end before getting the ball to the Lee-Scott side of the court. On Tuesday, the Wildcats were patient with the press and found the open player throughout the quarter, leading to a player advantage on offense.

“Just being confident in our press breaker. You can’t over dribble in a press break, and they didn’t,” Sampson said. “They turned, faced the basket and found looked for those cutters. They did a great job.”

While the press wasn’t as effective on Tuesday as it was last week, Springwood was still struggling to score. The player advantage led to looks inside the paint, but the shots weren’t falling. In the half-court setting, Springwood struggled to create space on shots, leading to tough looks.

While its defense was struggling, the Wildcats were holding their own defensively. Most of the Lee-Scott points a week ago were from turnovers. Without the turnovers, Lee-Scott’s offense had to be patient and look for openings. Outside of getting to the free-throw line, Lee-Scott made just one basket from the floor in the first quarter.

Springwood led by a point after the first quarter, but Lee-Scott started to find the holes in the Springwood zone and started to take advantage of the openings, hitting four shots from the floor.

Coming out of halftime deadlocked at 16 apiece, Lee-Scott quickly started to turn the tempo up. The Generals made a couple of shots early in the quarter, which allowed them to set up their full-court press again. This time the Generals adjusted the press. In the first half, Springwood usually had an open player at midcourt, who could catch the ball and force the issue. After the half, that player was being shadowed by a Lee-Scott player. This forced turnovers, which quickly turned into points.

In the half-court setting, Lee-Scott continued to pound away at the holes it found near the end of the first half and started scoring with ease in the paint.

“Our rotation on the backline wasn’t as quick as we needed it to be,” Sampson said. “They need to figure out to move when the ball is in the air. They played their hearts out, and that’s what we ask them to do.”

Lee-Scott outscored Springwood 40-17 in the second half, scoring 20 points in both the third and fourth quarters.

With the loss, Springwood falls to 0-3 in area play, meaning it will finish as the three seed in the area. Since there are only three girls teams in Springwood’s area, it automatically makes the playoffs, but it will have to travel for its first-round game.