The Village distributes food to 150 families 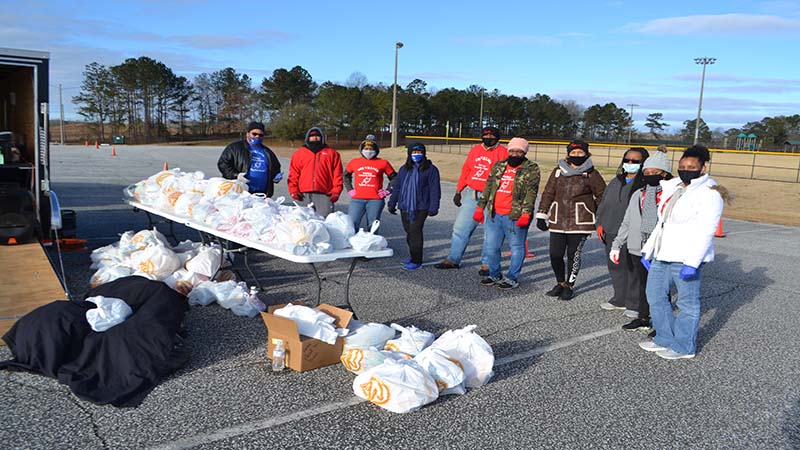 VALLEY — It was cold and windy on Saturday morning, but that didn’t dampen the spirits of the members of Valley Community Outreach (a.k.a. The Village) as they distributed enough food to feed 150 families at Valley Sportsplex. It was given out on a first come-first serve basis, and the bags of food went quickly.

“We have to thank Vivian Huguley for coordinating everything today,” said Clint Gilder, a spokesman for The Village. “She did that so well that all the rest of us had to do was to show up and take the bags of food to the cars that were coming through.”

Valley Mayor Leonard Riley was there at the 9 a.m. start to thank members of The Village for what they are doing for the community. A number of them were students at Valley High in the 1980s, and Riley was their principal.

Gilder thanked the mayor for coming out to support them and also had a word of thanks for Givorns Foods for helping sponsor the event.

The food bags that were given away contained a variety of non-perishable food items such as flour, meal, rice, pasta, mac and cheese, pinto beans, cereal, Pop Tarts, crackers, cookies and canned items such as tuna and Hunt’s Manwich.

The Village will be hosting another food distribution in February.

“We haven’t decided on a date and time to do it,” Gilder said. “We will be announcing that, and the location for it in a few weeks.”

The Village is also considering giving out COVID-19 care baskets.

“The baskets would have common household necessities such as sanitizer and cleaning items such as Clorox,” Glider said. “We will be doing this to help those who are recovering from COVID. We will be telling people how to contact us, and we will deliver the baskets to their homes.”