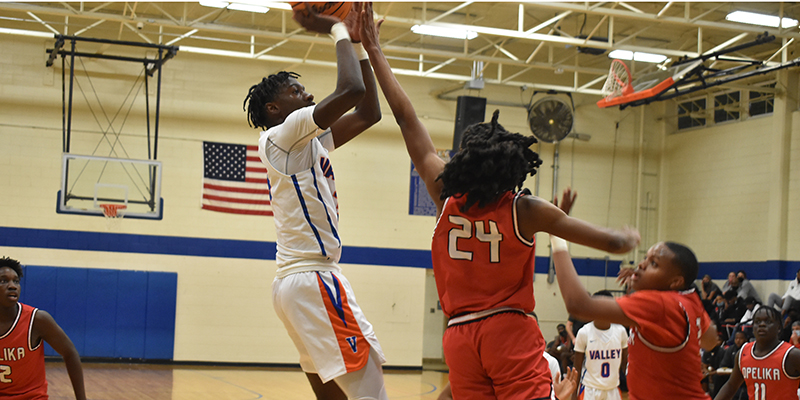 With 30 seconds left in the game, the Valley boys basketball team led Opelika by two points. The Rams’ offense had caught fire in the second half and it was trying to hold onto its slim lead. Instead of trying to hold the ball for the final 30 seconds, Valley shot a three-point shot in the corner. The ball missed everything and the rebound went to Opelika.

On the ensuing possession, Opelika’s Isaiah Knight drilled a 3-point shot and was fouled. He hit the free throw and gave Opelika a 58-55 win.

“We should have shot a layup right here but took a three,” head coach Marshon Harper said. “We shouldn’t have taken it. We’re up two with 30 seconds left in the game. I was calling a stall play, but that’s what comes with being young. Our point guard usually gets you in sets that you need to get in. We need to get our guards to be more vocal on the court.”

“We told them to keep their heads up. We still have a chance to win the area. We’ve only lost one game,” Harper said. “We just have to keep our heads up and keep fighting. We’re scrapping for every bucket, every rebound, every loose ball. We play hard, but I told them that we have to finish games. These are the types of games that you have to win at home. When it’s close like that and you’re up two with 30 seconds left in the game, you have to win that game.”

Coming out of the halftime break, the two teams were tied at 24, but both offenses found a rhythm in the third quarter. For Valley, it was simple: get the ball to Quez Trammell.

“He just demanded the ball. He just wanted to put the team on his back,” Harper said. “I just told them to ride the wave and feed him while he was hot. Just let him score some baskets and get him going.”

Trammell scored eight of the 16 Valley points in the third quarter, including knocking down two deep three-point shots. He also provided a spark on defense when he blocked a shot right at the rim, sending the crowd and his teammates into a frenzy.

Trammell was limited to just two points in the fourth quarter because the Opelika defense had a man guarding him the entire time, even when he was on the other side of the floor from the ball.

Even though Trammell was being stifled, the Rams were able to find open shots, as the drive and kick opened up room for three-point shooters. Even though the threes didn’t fall, it forced the Bulldog defense to adjust which opened up some shots at the rim.

Thursday was Valley’s first game since the team had to shut down due to a district-wide shutdown. The team couldn’t meet during the five days off and had to reschedule a couple of games that were going to be scheduled during the week. Harper thought the Rams needed to knock off the rust in the first half before being able to get into a rhythm during the second half.

Valley travels to LaFayette for its next game on Saturday.