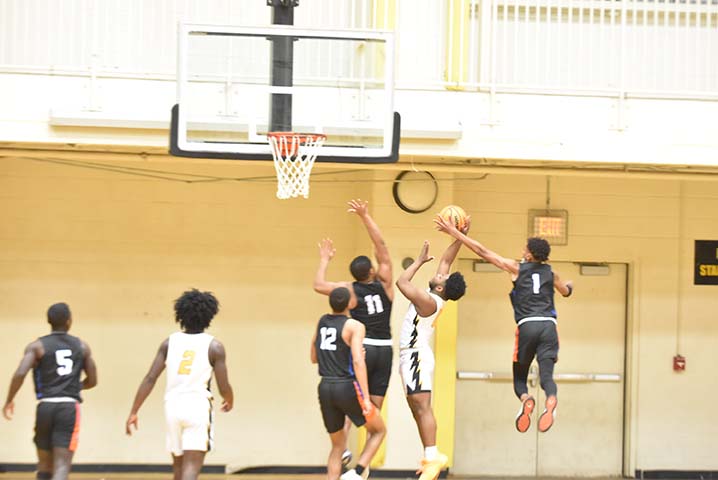 With less than a minute and a half left to play, the Valley boys basketball team was in a familiar position. Just as it did on Thursday against Opelika, Valley led by one possession and was trying to kill the time left on the clock.

The Rams ran the same play, getting a pass into the corner with a wide-open shot available. This time, Valley elected to hold onto the ball instead of taking the shot, forcing a LaFayette foul. The Rams held on for the remainder of the game, winning 52-45 on Saturday.

“We’re playing in somebody else’s house, so we had to play hard every second we’re on the court,” Valley head coach Marshon Harper said. “We went into a slump in the third quarter, but I told them to keep on playing, something is going to happen, and we pulled it out.”

The last time Valley traveled to LaFayette, the Rams forced a lot of turnovers early in the game and sprinted out to a large double-digit lead. Saturday’s matchup was a different story.

In the first couple of minutes in the game, Valley built a five-point lead, but LaFayette was controlling the pace. Valley wasn’t able to force turnovers and speed up the game as it did two months ago.

“We just took care of the ball and just tried to stay within ourselves,” LaFayette head coach Obadiah Threadgill said. “Sometimes our guys get a little antsy and want to just play backyard basketball. That may or may not be the best thing for our unit. Some nights, it has been. When we have a little more athleticism, we can speed things up … If we stay within ourselves and remain fundamental, we’ll be right there.”

Though Valley led at the end of the first quarter, the Bulldogs were still within striking distance, as they trailed by just four points.

Valley’s lead was eight by halftime, but the Rams were still trying to find a way to get into a rhythm on offense, as the smaller Bulldogs did a good job of keeping the ball on the perimeter for most of the quarter.

To start the second half, Valley jumped on LaFayette, starting the third quarter on a 9-0 run throughout the four and a half minutes. Valley knocked down a pair of 3-point shots and got a couple of offensive rebounds, finishing with a couple of second-chance opportunities during the run.

Even though the deficit was up to 17, LaFayette didn’t panic. The LaFayette offense settled down and worked the ball inside, where the Bulldogs had some room to operate.

“We just tried to play inside a little bit more. We run a lot of motion offense, so a lot of the time, we allow the game to dictate who takes a shot. I don’t call plays for individual players until it’s time for that,” Threadgill said. “Just making the conscious effort to go to Ja’Mariae [Daniels] consistently and go to Vinay [Singh], our kids know exactly what our intentions were. Sometimes we carried that out and sometimes we didn’t. Basketball is a rhythmic game, so once you get into a rhythm, good things happen.”

LaFayette outscored Valley 14-4 for the remainder of the quarter.

In the fourth quarter, LaFayette cut the lead down to three points with less than two minutes left to play, but Valley hit its free throws down the stretch, while LaFayette didn’t, allowing the Rams to hold onto the lead.