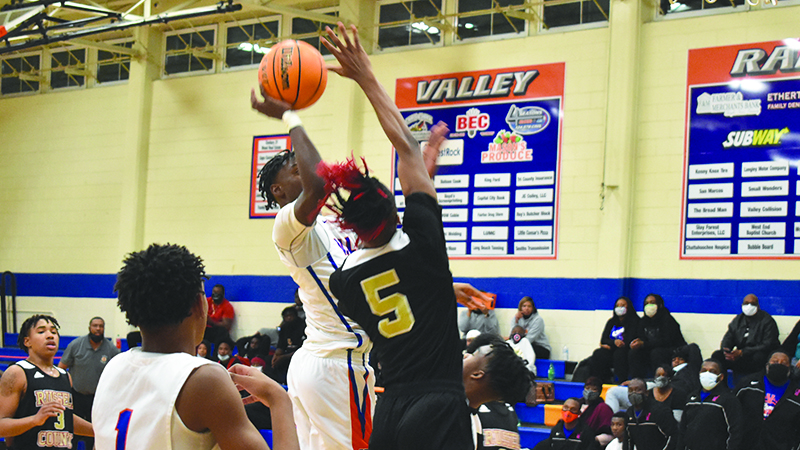 With a little more than 30 seconds left in the game, the Valley boys basketball team was down one. Senior Quez Trammell forced a turnover and charged down court alone. He went up for a tomahawk dunk, but the ball hit the side of the rim and bounced out of bounces.

Trammell had a chance at redemption with 5.6 seconds, as the Rams forced a travel and had the ball. Trammell got the ball and fought through contact to drill a runner and give Valley a one-point lead with 2.1 seconds left in the game. Valley held onto the lead, defeating Russell County 46-45.

“We missed some key shots there to win the game,” head coach Marshawn Harper said. “The game should have been over in the beginning. He told me ‘hey coach, I’m going to get it back.’ I trusted him. He’s got us here this far. The team has been playing hard all year. We just took a chance and shot the last shot.”

The game was a fight the entire way.

For most of the first quarter, the two teams were separated by just one possession. Whenever a team would hit a big shot or a long three, the other team would answer with a big shot or three. Valley led by three at the end of the first eight minutes. In the second quarter, freshman Brandon Thomas was a key difference-maker. The 6-foot-2 center was constantly grabbing offensive rebounds and fighting in the paint for good looks. He also splashed a couple of 3-point makes.

“He’s a freshman growing up,” Harper said.”He did a good job. [He showed] unbelievable character and unbelievable knowledge of the game. The sky is the limit for him. I just told the team to keep playing together as a team. You never know, this might be our last game, so we just have to keep competing every night.”

In the final 6:23 of the first half, Valley built a nine-point lead, which was at double-digits late in the second quarter. At halftime, the lead was at six.

Russell County tied the game at 29 apiece early in the third quarter and took the lead midway through the quarter. Valley struggled in the third, as shots weren’t falling and Russell County started to block some shots around the rim. Valley led by one point heading into the final quarter of play, where Russell County nearly claimed the road win.

The win gives Valley its first area win of the season.

“It’s huge,” Harper said of the first area win. “We always have to defend home. That’s what we always say, we have to beat every area opponent at home. When we go on the road, we have to throw our name in the hat and see what happens. We did a good job, we’re 1-0.”

Friday’s area game against Eufaula is postponed and is expected to be made up later this season.

Tuesday was Valley’s final game of the week, as the Chambers County School Board approved pandemic days for the remainder of the week. During the pandemic days, teams are not allowed to be together until Monday.

“It’s just hard. My kids get in a rhythm and then we have to be shut down,” Harper said. “I’m going to stay on the phone with them and text them. I have some film that I have on the other opponents. That’s all we can do, along with telling them to jog a little bit and shoot on their own.”