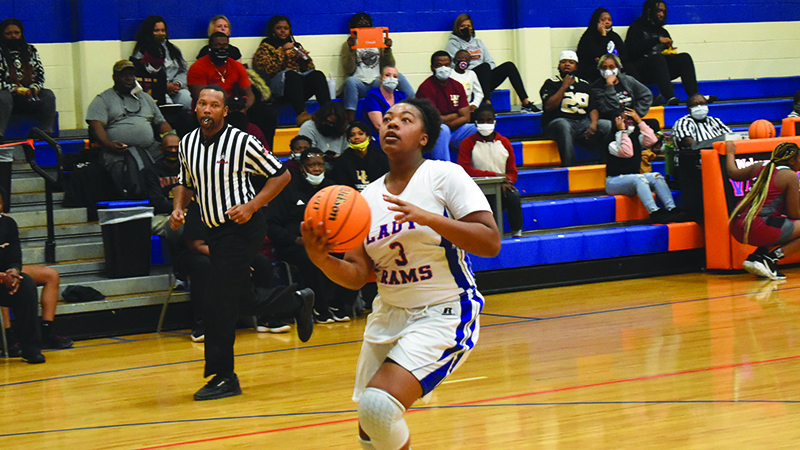 The start to area play went as poorly as it possibly could for the Valley girls basketball team.

It struggled early in the game and dug a big hole in the first quarter of its 72-30 loss to Russell County.

“I had already told them on Saturday that we were fixing to know what we’re made of this week.  I knew Russell County had a good bunch,” head coach George Grimes said.

In the first quarter, the Rams were outscored 31-3. In the first five possessions of the game, Russell County hit three 3-point attempts and a shot from the floor to give it a double-digit lead a couple of minutes into the game. Valley on the other hand struggled to get the ball up the court, either finishing with a turnover in the backcourt or around the 3-point arc. The turnovers forced Grimes to take some early timeouts. In those timeouts, he was just trying to get his team composed.

“I told them that we were going to have to settle in and compete. This is a different beast in 6A,” Grimes said. “They kind of got introduced to it.”

The Rams scored their first point of the game with 4:51 left in the quarter. It cut the deficit down to nine, for the remainder of the quarter, they were outscored 20-1. The turnover problems continued throughout the quarter.

Fifteen of the 31 Russell County points in the quarter were scored from beyond the arc.

In the second quarter, Valley limited the damage to 11 points, but Russell County had started to play its bench mostly in the quarter.

“The second half, we played a lot better than the first half,” Grim said. “They kept playing hard. It was kind of like an avalanche, it just kept falling on us, but they kept competing. It could have been very easy for them to say ‘coach I’m done.’ With only nine, they stepped up to the plate. I’ve told them before, the great teams before you have taken some whoopings too. It’s no different from y’all.”

The guard play was an area of concern entering the season as four of the Rams’ top ball-handlers are no longer with the program, most of them graduated. Against a bigger and quicker Russell County team, that area of concern was made evident.

“This is still a learning process,” Grimes said. “They’ve made great strides. They’re getting better, but it just takes game experience. This game that we’re getting is good [experience]. A lot of teams around the state are in a bad situation where they start and stop.”

Tuesday was Valley’s final game of the week, as the other two games were canceled because of the Chambers County School District announcing that the rest of the week would be pandemic days. Grimes and his team are not allowed to practice or be together until Monday.

“They get a chance to go back and watch film and see where they can get better,” Grimes said.