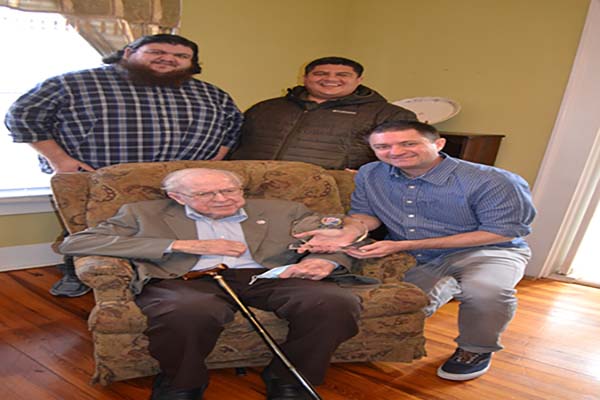 VALLEY — On Sunday of this week, the chief executive officer, director of human resources and tourism road manager for the All American Boys Chorus flew across the U.S. to personally thank someone who had been exemplary in their support of their organization. Aaron Cassaro, Peter Raia and Pierre Calderon flew from Los Angeles to Atlanta and then drove a rental car to the home of Bill Gilbert to present him with a 20 Years of Excellence plaque.

Gilbert has a two decade connection to the All American Boys Chorus. Over that period, he booked them for appearances at Langdale Theater five times.

The Boys Chorus played to sold-out crowds each time at the theatre and received numerous standing ovations from the enthusiastic attendees. Cassaro, Raia and Calderon are all Boys Chorus alumni. Cassaro graduated from the chorus in 1995.

He was only 16 at the time but had had a life-changing experience being with the Boys Chorus and wanted to continue on in some capacity. Two years later he became a member of the staff and has since worked his way up to being the organization’s CEO.

“We like to take boys who are not from perfect backgrounds, retain them for several years, allow them the thrill of performing before a crowd and at the end of it all, make them a much better person when they graduate,” he told The Valley Times-News.

“We were going to perform at Langdale Theater in October of that year,” he said, “but the entire country went through a terrible event on Sept. 11 of that year.

We had to cancel the tour we had planned for that fall.”

The concerts were rescheduled, and the All American Boys Chorus made it to Langdale Theater for the first time in March 2002.

“Bill has been p0art of our family ever since then,” Cassaro said. “We’ve talked by phone at least once a month ever since then. Our boys love performing on the stage at Langdale Theater. We’d love to have a return performance someday.”

Cassaro said that sports is the number one activity for youth growing up, and he’s fine with that.

The Boys Chorus offers an alternative experience while leaving time for the boys to play football, basketball, soccer, baseball and any other sport they’d like to participate in.

Those who come through the program receive mentoring from the older boys early on and then become mentors themselves before graduating.

The youngster’s big audition is to sing “Edelweiss” from The Sound of Music to a four-member panel.

“If he passes, he goes into the training division, where he memorizes 40 songs and sings them in front of the older boys. If he passes there, he becomes a member of the concert chorus. He can be in it for up to seven years.

He learns to read music and takes voice lessons from a professional voice coach. If they stay with us, they will be reading music on a college level before they graduate. It’s something they can have for the rest of their lives.”

Participation in the Boys Concert Chorus has a way of turning a boy into a gentleman.

“They have to take on individual responsibilities,” Cassaro said. “They make their own breakfasts and learn to dress for success.”

The boys learn first-rate social skills as members of the concert chorus.

“We teach them the proper way to shake hands and look people in the eye,” Cassaro said. “After each performance, they practice that with people from the audience. It’s the way to make a good impression, and they are learning it at a very young age.

Anyone who’s in the concert chorus has gone through a lot to get there. They are proud to be part of it, and their parents are so proud of them. There are lots of happy tears in the concert tours.”

In most cases, when a boy leaves the All American Boys Chorus at age 16, he has traveled all over the U.S. and performed in at least 150 concerts.

COVID-19 has limited performances by the Boys Chorus since March, but there are plans to slowly get back into touring.

“We hope to get back into some sense of normalcy in 2021,” Cassaro said. “We’d like to have them perform in Western states.”

The pandemic has caused some well-known boys’ choruses to suspend operations. The All American Boys Chorus has survived better than most and is looking forward to getting back to touring in a major way once the country gets past COVID-19.

“I’m excited to think about where we will be five or ten years from now,” Cassaro said. “We’ve come a long way since we started out at the Orange County Fair some 40 years ago.

At that time, we were a 10-member barbershop choir. We would sing in retirement homes, and almost anywhere we’d be invited.”

In recent years, concerts have had as many as 100 boys singing a variety of music from jazz and Dixieland to classic rock. One thing that’s always been there is patriotic music.

“It’s always been at least 30 percent of our performances,” Cassaro said. “We’ve always been, and will always be, big on God and country.

Cassaro said he loves to meet older men who were in the chorus in its early years.

“They are always telling me it was a life-changing experience for them,” he said. “I like it when they tell me they are the person they are because of having been in the All American Boys Chorus. Those who have been through the program are truly blessed.”

“We came all the way from California to present you this award,” Cassaro said to Gilbert. “You are the only person we’d travel that far to present such an award.”

Gilbert was moved by that and by a video presentation he witnessed virtually. In the video, current members of the chorus thanked him for his long-time support.

“We want to come back to Valley, to see you and to perform at Langdale Theater,” one of the boys said.

In addition to the plaque, Gilbert received something few, if anyone, in Alabama has — a llama sweater.

It’s very warm and made from the fur of a llama. Pierre Calderon is originally from Ecuador and was able to get it for him.