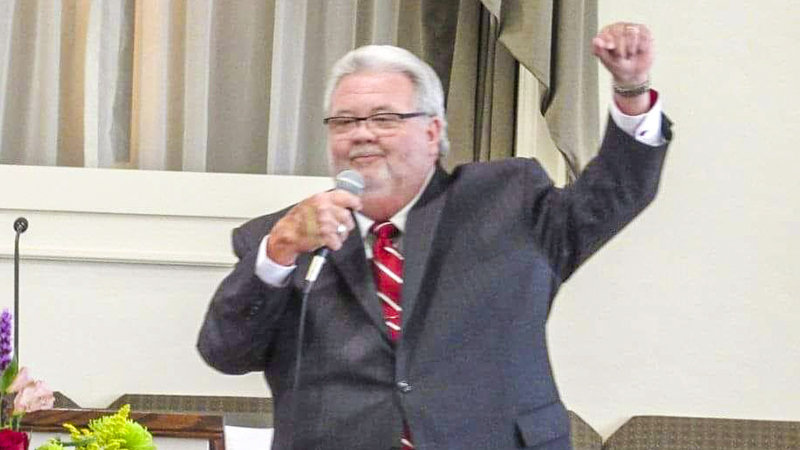 VALLEY — Hundreds of people in the Valley and Chambers County have lost a dear friend with the passing of Charles Story. Some had a lifelong connection with him through his work in local law enforcement, others would always appreciate the courteous and caring manner he always exhibited to them in his dealings with them as the county’s clerk of court, legions of people loved him for hosting the Southern Gospel Review on local radio for the better part of four decades and anyone who heard him sing loved that baritone voice.

“I always kidded with him that he could harmonize with a billy goat,” said Adam Traylor. “He was like family to me and had a great influence on my life.”

Taylor is the minister of music at Lakeview Baptist Church in Auburn. He and wife, Teel, sang with Story at many events throughout the east Alabama-west Georgia region.

“He sang at our wedding back in 2004,” Traylor said. “He was a classic wedding singer, but was best known as a funeral singer. He sang at many of them over the years. He was the kind of person if you asked him to do something for you he would.”

Valley Police Chief Tommy Weldon said that was a trait he would always remember about Story, who had worked for the VPD in the 1980s.

“When I applied to be a police officer for Valley Police Department back in January 1985, he was a detective with the police force and interviewed me for the job. He recommended me to be hired, and I started there in February. He was so good in taking young officers and teaching them how to talk to people, help them and be there for them if needed. I will never forget him telling me that if you told someone you’d call them to do it without fail.”

Weldon said that Story always treated people with respect and had superb skills in talking to people.

Valley Mayor Leonard Riley said Story was always volunteering to take on all kinds of tasks for Valley High when he was the principal there. He served as the school’s stadium announcer for a number of years.

“I can’t say enough good things about Charles Story,” he said. “He was as good as they come. His son, Paul, was on the council before becoming probate judge, and he was a very good council member.”

“We were friends for over 40 years,” she said. “We worked together at Valley Police Department back in the 1980s. I would never have run against him, but when he retired in 2012, I ran for the office and won. He was so helpful in the transition. I learned so much from him before I was sworn into office in January 2013. I will always remember him and appreciate him teaching me so much.”

Bill Gilbert, who served as the county’s revenue commissioner from 1967-1998, said that Story was a positive person with everyone he met.

“When he was a policeman in Valley, he helped many young people to take the right path in life,” he said. “He wanted them to do well in life and got many of them to attend church. His fellow police officers loved him. He was a strong asset for our county, and he will be missed by many. Charles was a very gifted singer and would sing a song at the drop of a hat. He loved to sing, and people loved to hear him sing. There’s no telling how many places he’d go to sing. He sang in many churches, for reunions and benefits for people.”

Adam Traylor said that Story had a big impact on his current career in music.

“I got my start in a gospel quartet when I was 15,” he said. “We were in the Heritage Quartet at the same time. He’d work the drums on some songs, and I would work them on other songs. He would play the piano some but was limited due to his rheumatoid arthritis, something he’d had since he was seven years old.’

“Charles was a wonderful friend. We were really close. We made six gospel CDs together. His son, Paul, and I are the same age. We went to Valley High together.”

In 2001, Traylor started singing with his grandfather as a member of the well-known James Brown Trio. His grandfather, James Brown, died in 2013, and the trio reformed with Story taking on a big role.

“Charles had a beautiful voice,” Traylor said. “At one time, he was asked to fill in for the Dove Brothers, a well-known gospel group from North Carolina. He did that for a time and traveled with them. Of course, he’s best known for what he did in the Valley area. He sang solo in many events at churches, homecomings, weddings, functions for nursing homes, American Legion Christmas dinners, you name it. He was always serving the community. At one time, he took voice lessons from Jerry Redd and sang with the Redd Brothers. He was such a huge influence on me in getting me into Southern gospel music.”

In his early years at WCJM, Story worked with Jesse Lipham on Sunday morning gospel music shows. He later worked with Ronny “Spanky” Sanders and his son, Paul.

“Charles always looked for talented guys from the Valley and getting them into Southern gospel music,” Traylor said.

“Randy Miller is now with the Kingsmen Quartet, and Bryan Elliott has done well in the field playing the piano. Charles helped them along the way.”