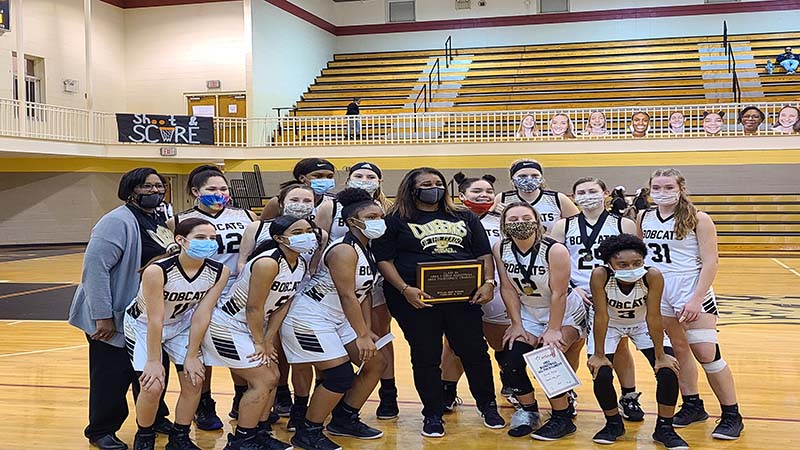 The Beulah girls basketball team poses together after defeating Reeltown in the 3A Area 7 championship. The area championship is the team’s first in school history.

Coming into the season, the goal for the Beulah girls basketball team was to finally win its first area title and host a sub-regional game. The Bobcats had been close the past two years, but on Thursday, they broke through, defeating Reeltown 48-32 in the 3A Area 7 championship game.

“It feels like it’s been a long time coming,” head coach Sabrina Milligan said. “I am so happy for the girls. They’ve worked so hard since I’ve been here, this is my fourth year here, and we’ve come a long way. Just our work ethic, not just on this court but in the classroom, I am so excited and happy for them. It feels like it took a while, but good things come to those who wait.”

The 2020-21 season hasn’t been easy for Beulah. The team has dealt with several shutdowns related to COVID-19, shutting down two times before Christmas and starting again in the middle of January.

Overall, it played just 14 regular-season games, but Beulah finished 3-1 against its area. With Thursday’s win, the Bobcats finished over .500 for the first time since Milligan came to Beulah four years ago.

“Dealing with COVID makes it more special. We would play a game, then sit down for 14 days, play a game then sit down another 14 days,” Milligan said. “For the girls to handle all this adversity and keep competing. We’re above .500 for the first time since I’ve been here, but not only that but we’re area champs. They said it couldn’t be done, but we did it.”

Both teams started the game slowly. Beulah was forcing a good amount of turnovers early in the game but was struggling to finish the fast break with a score, usually missing a layup or a jump shot.

Though the Bobcats’ shots weren’t falling, Reeltown struggled to consistently break the 2-2-1 press that Milligan had installed recently. After the first two minutes without a score, Beulah slowly started to make some fastbreak shots, slowly building a lead.

“We wanted to pressure their ball handlers a little bit to see if we can get some turnovers,” Milligan said. “Finally, we started making shots. I think we had little nerves.”

Once the shots started falling, Beulah took control of the game. It outscored Reeltown 13-1 in the opening quarter and never looked back.

In the second half, Beulah showed it could knock down some jump shots in quick succession, something that it has struggled with in the past.

“Savanna hit some big shots,” Milligan said. “We’ve been working trying to shoot the ball a little bit. To hit some jump shots, those were big, because that pushed the lead up.”