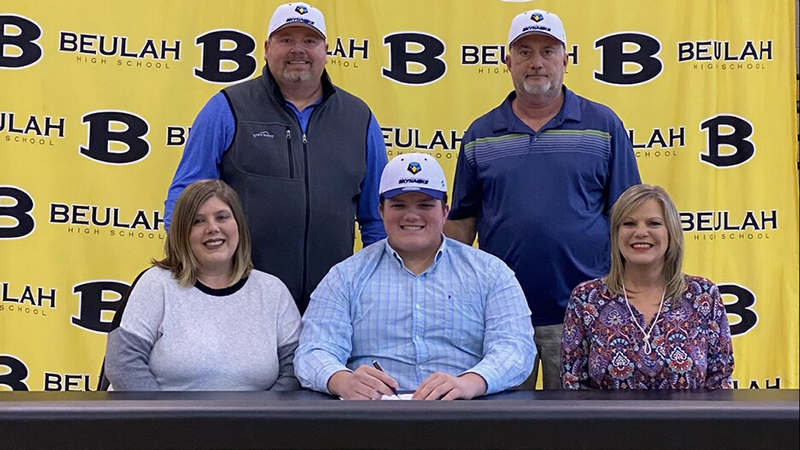 In his recruitment, Beulah’s Austin Billingsley was looking for a place that felt like a family. Throughout talking with coaches and visiting the school, Billingsley found his next family at Point University.

“It felt like a big ole family right as soon as I got there,” Billingsley said. “It’s a big family over there, and I want to join that family. This is  where I belong.”

He made it official on Wednesday when he signed his official letter of intent to join Point University’s football team.

“It was so real. It didn’t feel real at first, but then it started to sink in. It just made me feel good,” Billingsley said. “I’m blessed to be in this position.”

Beulah struggled on the football field this season for a combination of reasons. Along with the realignment adding a lot of tough region teams and an overall young team in general, Beulah struggled with COVID-19. The Bobcats missed the first three games of the season and at various times throughout the season lost a coach or a couple of players.

“We had a lot of problems with COVID, and we didn’t do too good as far as our record goes, but knowing our situation and knowing what we went through, it grew me,” Billingsley said, “just seeing those people go through the hard times as they did. It is what it was, and we got through it. Now, I’m going up to the next level.”

Billingsley plans to major in education, so he can be a math teacher.

There were a couple of major factors that drew Billingsley to Point.

One major point to Point University for Billingsley was the automatic Biblical studies minor that each student receives.

“I’m going to try to become a youth pastor as well,” Billingsley said.

The second was the proximity to his family’s home in Beulah.

At 6-foot-3, 325 pounds, Billingsley was an anchor on the offensive line. He started four years of his high school career and has the ability to play every spot on the line. For most of the season, Billingsley played either tackle or center.

On defense, Billingsley was a stop-gap in the middle of the defensive line, usually clogging holes against the run.

As of now, he isn’t sure what side of the ball he will play at Point, but he just wants to be able to make an impact on the field.