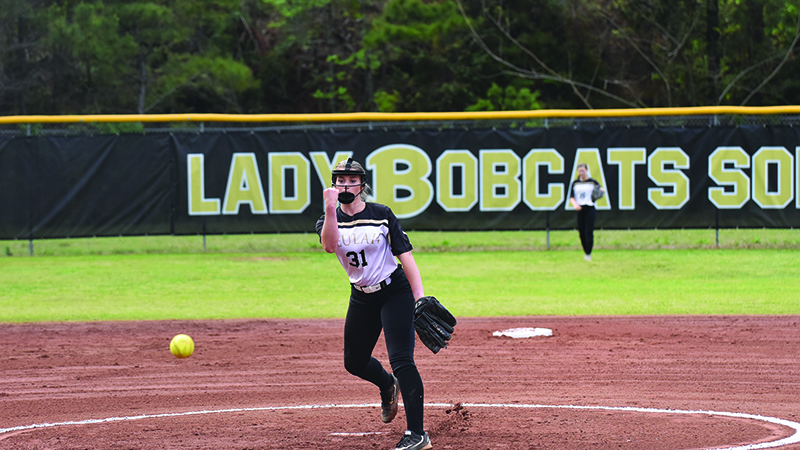 Earlier this month, Beulah senior Austin Billingsley chose to continue his football career at Point University. On Thursday, Beulah junior Katie Morris announced that she had committed to West Georgia to play softball.

“I wasn’t looking for a specific thing in college, but visiting other colleges and comparing them to West Georgia, it just feels more like home,” Morris said. “I liked everything about the college, and I like how it’s big, but not too big. The coaches had the same beliefs that I have.”

While she still has about a year before she officially signs, Morris wanted to get the decision out of the way so she can focus on just playing her junior and sophomore years at Beulah.

“Now, I don’t have to stress about it. Your senior year, you can just play for fun instead of stressing where to go. It’s good to get it off your plate,” Morris said.

Morris will pitch at West Georgia, a sport she plays both at Beulah and the Easton Gold, a college prep softball team. When she isn’t pitching for Beulah, Morris plays shortstop for head coach Stan Pepper.

“It’s a big lift off her shoulders and ours, knowing that she has a future. Now, we can just focus on playing ball and winning some ball games,” Pepper said. “I’m really proud of her. She’s probably one of the hardest working people that I’ve ever been around. She started playing for me in the seventh grade, and she works harder now than she did then, and I thought she was working too hard then. She loves the game.”

Morris has always had the velocity off the mound, throwing in the mid-60s (the average college softball fastball is about 65 mph) last season as a sophomore, but the focus for her last year was hitting her spots.

“Last year or so, we’ve been working on her to be able to spot her balls better on the mound,” Pepper said, “but she’s picked up about three or four mph now. She’s probably throwing on average in the mid-60s. She’s just a worker. She’s going to do whatever she needs to do to be successful.”

Beulah returns a majority of its team from the shortened 2020 season, losing just three seniors off last year’s team. Along with Morris, Pepper returns most of his infield and his other main pitcher, Brandy Phillips.

“We’re excited about the season. We’re young, but we have a lot of girls that are going to have the opportunity to go to the next level,” Pepper said. “We just have to get the pieces in the right spot this year.”

While the Bobcats are young this year — they have only a couple of juniors and no seniors on the roster — the team already has chemistry. Several of the players already play together on the Bobcats volleyball, basketball and softball teams.

“It definitely helps. I know that I can trust them and their ability,” Morris said.

To get over the hump this year, Pepper is making sure the Bobcats play several tough teams throughout the season, so once the area tournament and playoffs start, the Bobcats will be accustomed to closing out big games.

“I want us to have played as many hard games, so we can learn how to win some of those, so when we get to Oxford, we’ll be used to playing stiff competition,” Pepper said. “If you’re going to be the best, you have to beat the best, and we have a lot of good softball programs around here.”

Some of the teams on the schedule are Auburn, Eufaula, Enterprise, Handley and Smiths Station just to name a few.

Beulah will start its season playing in the Phenix City tournament, which starts on Saturday. Beulah’s first game will be against Auburn at 11 a.m. EST for its first of three games.