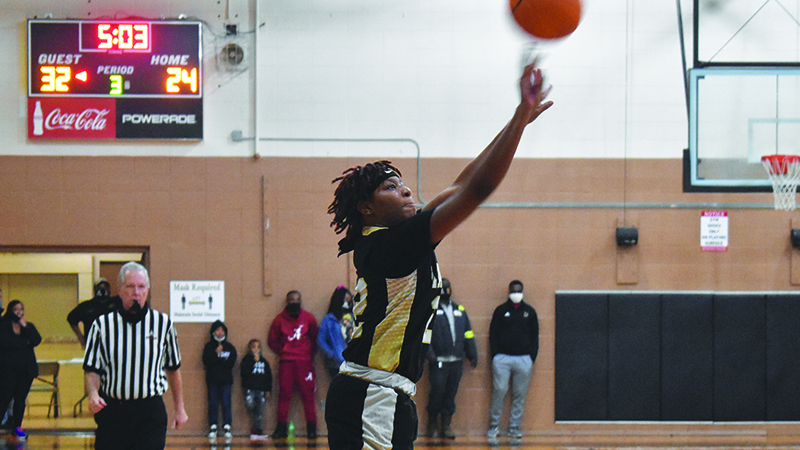 For the Lanett girls basketball team to reach the 2A Southeast regional championship, the Panthers needed to defeat the No. 6 team in 2A, a team that had won more than 20 games this season and featured a Division I commit. The Panthers outlasted Geneva County, winning by eight points.

Junior Breanna Glaze was a big reason for the Panthers’ success in the regional game, finishing with 31 points, continuing the hot streak she has been on since early January.

“We weren’t scared, but we were just nervous, especially for a Tennessee girl [Karoline Striplin] to come here to little old Lanett. We had to show them that we weren’t anything to play with,” Glaze said. “I feel like they took us as a joke, and we had to prove our point.”

Glaze, like a lot of players around the state this season, had to catch her stride midway through the season.

“It took her a while because of the pandemic. We really didn’t get an offseason to practice to do anything,” head coach Charlie Williams said. “All of them started off kind of rusty.”

Along with not having a summer to fine-tune their skills, Glaze and the rest of the Panthers missed most of the month of December, as the team was shut down for quarantine after playing just two games and breaking for the Christmas holiday.

The turning point in Glaze’s season was after the team’s loss to Ranburne on the road. It was the Panthers’ first game after returning from quarantine, and they struggled on the road, losing by 17 points.

In the loss, Glaze struggled to find her shot.

Part of the early season struggle was the fact Glaze was rusty. Alongside struggling to find her consistent shot, Glaze was being guarded much differently in her junior year than her sophomore season. After breaking out with 17.4 points and 9.5 rebounds a game last year, opponents made her a focus.

“I just have been getting the shots that I wanted. I wasn’t getting them early in the year, but when I get the shot, I just have to take it,” Glaze said.

With their early-season struggles, the Panthers felt like they had been written off this season, so the seniors came up with a motto that has been pushing them through their playoff run.

“I’m just trying to finish and trying to go all the way. We’ve never made it this far,” Glaze said.

In Montgomery, the Panthers will play LaFayette for the fourth time this season. LaFayette won two of the previous three games, including the 2A Area 7 championship, winning on an Ebony Williams 3-point shot in the corner with less than three seconds remaining in the game.

Though none of his current players have gone this far in their careers, Williams is making sure his team is relaxed before hitting the road.